How Much Juice is in One Lemon - Make a Lemonade

When making a lemonade or simple lemon water, many people wonder how much lemon juice is in one lemon. Well, that depends, but for homegrown lemons it ranges from one to two, sometimes even more ounces of lemon juice. 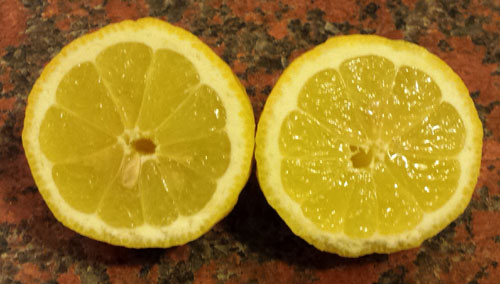 Procedure is simple - using sharp knife slice lemons in half and then squeeze the juice using manual or automatic juicer. Put the glass or some suitable pot on the scale, null it (scale must show 0g or 0 ounces with the glass on the scale), pour the lemon juice in the glass and check the weight on the scale.

Large lemons bought in supermarkets can provide much more lemon juice, but the taste can't and shouldn't be compared with homegrown lemons.

Nutritional content of raw lemon and lemon juice varies depending on the lemon variety, season, growing conditions and similar, but general values are given in the following table:

Lemon and lemon juice also contain potassium, copper, B6, phytosterols and other vitamins, minerals and beneficial compounds. Note that lemons and lemon juice don't contain cholesterol and that it is very low on sodium.

It is very reasonable to assume that this ~120g (4 ounces) of lemon juice contains around 60 mg of vitamin C (plus other vitamins and minerals), which is vitamin C RDA from less than 40 kcal. Nice! :)

How to Make a Lemonade 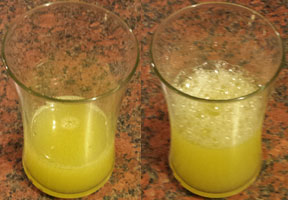 If you don't like strong lemonade, add more water and if you like, add some sweetener - sugar, brown sugar, honey, stevia or similar.

There are many fruits out there that have more C vitamin than lemon, but a glass of lemonade in the morning boost my energy levels stronger than coffee or any similar beverage, especially when not diluting the lemon juice with much water and, of course, without any sweetener.

For people having issues with blood sugar levels, have in mind that estimated glycemic load of 100g of lemon juice with no sweeteners is around 1 - and that is very low!

In fact, lemon juice is acidic and it slows down how quickly human body break apart molecules of sugar, causing a steadier rise in blood sugar levels. So, if you want to decrease glycemic load of your meal, sprinkle some freshly squeezed lemon juice on your food or have a lemonade during your meal. Without sugar added, of course! :)