Makita XCU02 is lightweight and relatively low-noise chainsaw that can do its task rather well and that can come very handy to many gardeners.

Makita XCU02 is powered by two Makita 18V LXT lithium-ion batteries, for total voltage of 36 volts. As cordless chainsaw, Makita XCU02 may be found as:

If you already own a pair of LXT 18V 5.0 Ah Makita's batteries, Makita XCU02Z comes at very affordable price.

But, with Makita XCU02PT cordless chainsaw kit, user gets two batteries and dual port charger that can be used for other Makita tools being powered by their 18V LXT tools - and that is a long list of cordless tools ...

During operation, noise level is ~87 dBA, which is much lower when compared with gas powered chainsaws - nonetheless, ear protection, protective goggles and gloves are a must have.

Note: Makita XCU02 is very simple to use and maintain cordless chainsaw, but when it arrives, be sure to read its manual thoroughly in order to know your new chainsaw better. And don't forget to charge the batteries prior first use.

Whole Makita XCU02 as a tool is engineered with a series of protective seals inside in order to protect the unit from water, dust and other debris that may damage the tool - so called Makita's 'Extreme Protection Technology (XPT)'. 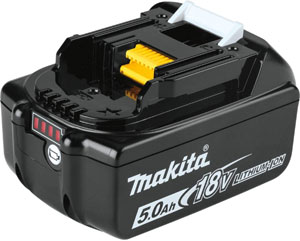 Makita BL1850B batteries are power fade-free batteries, delivering consistent power regardless of their charge level and operate even in very cold weather (down to -4°F/-20°C).

Each Makita BL1850B battery weighs 1.4 pounds (~640 grams), which isn't much for the battery storing ~90 Wh of energy and featuring rather sturdy casing and built-in protective electronics. 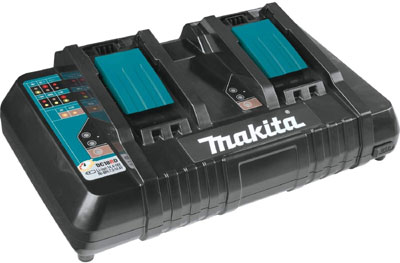 Makita DC18RD actively cools the battery via built-in fan that circulates the air through the battery, allowing the battery to be charged faster.

Also, during the charging, charger communicates with the batteries' onboard controller chips and adjust the charging process according to the battery condition.

Thus, Makita DC18RD is able to:

In many situations, Makita DC18RD charges Makita LXT batteries faster than they are being discharged during use, giving them some time even to cool down - and cooling the batteries down is highly recommended for prolonging their lifetime.

Note: chainsaws and similar tools may cause damage, injuries or worse. Use them according to the manufacturer's recommendations and at your own risk. These are not toys!

For more reviews and recommendations, feel free to check Makita XCU02Z (Tool Only)