Holly is the dominant plant on people’s minds as the holiday season approaches. You will find holly in wreaths, decorating doors, hanging from rafters, and even hanging from Christmas trees in neat little clusters. The little red berries on holly plants look delicious but are they safe to eat?

Holly berries are quite poisonous, and you should never try eating one. They may look bright, red, juicy, and inviting, but unless you are looking for a night of vomiting, severe diarrhea, and a potential visit to the hospital, never ingest one.

Holly is potentially deadly for children, not just because it's a poisonous plant but because they look incredibly inviting to a child, especially when they are young, curious, and enjoy jamming everything they can find in their mouths. 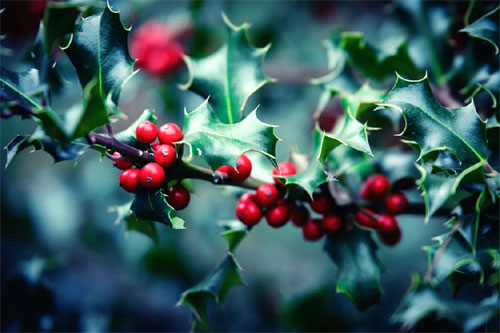 What Happens if You Consume Holly Berries?

Holly berries are slow-moving when it comes to digestion. It may take an hour or even longer before you start feeling anything is amiss. If you have a very fast metabolism, you might feel something a lot quicker, however.

Nausea is most likely the first negative side effect you will feel. It won’t last long before the vomiting follows suit. What happens is your body knows that whatever you eat is no good, and it tries to get rid of the stuff by causing nausea and inducing vomiting.

Once the vomiting cranks up, diarrhea is sure to follow. The biggest danger during this phase is dehydration. Vomiting and diarrhea effectively push water out of your body, even as your body rushes to send water where it needs to go, so it can facilitate getting rid of the poisonous berries.

Dehydration is the part that’s most dangerous as it can potentially lead to death. Drinking water probably won’t help since your body will most likely sick it back up before it has a chance to do you any good.

An adult who is otherwise healthy is not likely to reach the point of death, but it's always possible. If you accidentally ingest holly berries, you should go to the hospital. There, they will pump your stomach and administer drugs to help keep you from throwing up and running to the toilet every five seconds.

What Should You Do if Your Pet Ingests Holly Berries?

For the most part, dogs and cats are instinctively aware of what is bad for them. The worst part about pets is that you are not likely to know what it is that they’ve done. It's not like your dog or cat can tell you what it was they ate a few minutes to an hour ago.

The only thing you can do is look for signs of what is wrong. Go outside and look around in their favorite investigative spots or where they like to use the bathroom. For cats, you may need to check the decorations inside the house to see if you have live holly plants inside.

They will display a number of different symptoms that, if nothing else, will tell you that something is very wrong.

A dog or a cat is affected by the poison in holly berries in much the same ways that we are. Their bodies will try to reject the poisonous substance from the body before it can cause any real damage. Unfortunately, cats and dogs tend to have a much faster metabolism than we do.

If the symptoms get worse than just a general reaction, you should call your veterinarian immediately. Most vets have an emergency room for dogs and cats, just like hospitals do for us. They will probably be able to get your cat or dog in quickly. 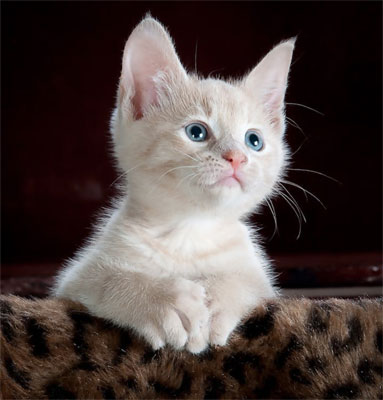 What Should You Do if Your Child Ingests Holly Berries?

This is a no-brainer. With pets, there is at least a sort of natural resistance to eating the wrong thing, which makes them a little more resilient. With children, there is no such defensive mechanism.

You should call 911 immediately. If you are on the road, make for the hospital immediately. There is very little you can do on your own, and attempting to induce vomiting in your child may have more disastrous consequences than you realize.

Even if your child is too little to tell you what they just ate, they usually aren't very good at eating things without leaving a visible sign on their face, nose, and around themselves. If you still don’t know but suspect, you should sit them next to you and closely observe until enough time has gone by.

You also need to try and figure out how many they ate because that’s important information for the nurses and doctors to know. It's not a good idea to give them anything to drink other than water.

There’s a good reason for that as well. There are many different drinks out there, especially fruit juices and drinks like Gatorade, that your stomach absorbs very quickly. If your child drinks anything like that after ingesting holly berries, it will force the body to absorb the drink as well as the berries more quicker.

Like an adult, the hospital will pump their stomach and medicate them for vomiting and diarrhea, which will help to keep them from losing too much water. They’ll probably also be hooked to an IV with a steady water supply.

It doesn’t take much with children. According to the Poison Control Center, a child may show symptoms after ingesting only two berries. Holly berries are quite small, so that’s pretty bad.

What is In Holly Berries?

Holly Berries are a part of the genus of hundreds of different species. There are 6 species that are categorized as Ilex, which is a holly plant. All of the berries on these plants contain “ilicin,” which is the primary poison that causes all of the problems.

While most scientists considered ilicin to be a substance that’s not incredibly poisonous, it still manages to make adults ill and is potentially deadly to children. The best that can be said about the whole thing is that holly berries taste awful.

It's more logical to worry about the berries being swallowed than chewed up first. Kids hate things that taste awful, and if they happen to chew on the berries first, it's highly unlikely they’ll swallow it, spitting it out instead.

Though the leaves of the holly plant are soft and chewable, they don’t taste good either and lack the ilicin found in the berries.

Holly berries also contain very small amounts of cyanide. Nowhere near enough to be fatal, but it adds to the overall concoction of bad things found in a holly berry, including amygdalin and ilicin. The amygdalin actually converts into cyanide in time. 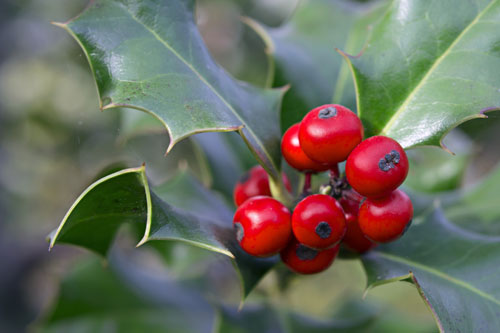 How to Prevent Children and Pets from Accessing Holly Berries

One of the best things you can do to keep holly berries out of the mouths of your pets or children is to never use natural, living holly in or around your home. Most of the time, people decorate their homes (inside and out) with fake holly rather than the real thing.

However, like purchasing a real Christmas tree, there is a certain allure to having real holly in the home over the holidays. If you feel like you just have to have it, and you have children and/or pets in the home, hang it out of reach of both.

If your child is old enough to understand, you should let them know that under no circumstances should they ever put that in their mouths and then hang it well out of their reach anyway.

Pets are a little more difficult though most people will hang their holly well out of reach of their dogs and cats. Cats probably won’t eat the stuff, but they may want to lay on the floor and bat it around with their paws because that’s just what cats do.

Other Plants in the Holly Family

The English and American Holly are probably the hollies that you and most people are familiar with. It has spiny leaves with a glossy surface and tiny red berry clusters. Carolina Holly is similar, except the berries are slightly bigger, and they don’t cluster up as much.

Catberry Holly lacks the spiny, glossy-looking leaves, along with the clusters of red berries. Instead, Catberry Holly plants have single, larger red berries that are just as scattered across the bush as the leaves are.

Chinese Holly, also known as Horned Holly, has similar leaves that also have three horns on each. These horns typically curve upward and look a lot more dangerous than they really are.

Last is the common winterberry, which lacks the spiny, glossy leaves, and though the berries are clustered, they are a little larger. 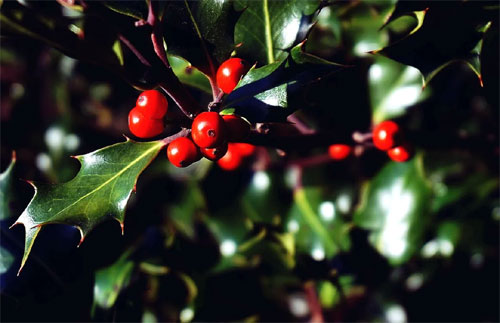 Holly berries are poisonous to humans and especially poisonous to children, as their bodies aren’t mature enough to effectively combat the poison of the berries.

You should never eat them or allow your youngest or your pets to have access to them unsupervised.