Dogs don’t really know which food is good for them and which one is not. Whatever their owners eat, they want their share of their owner’s food. It’s the owner’s duty to feed their pup responsibly after researching well about if a particular food is good or bad for their doggo.

Among all other foods that humans eat, tomatoes are particularly interesting for canines. In such a situation, a dog owner may wonder whether they should feed tomatoes to their beloved pooch or not. Let’s see. 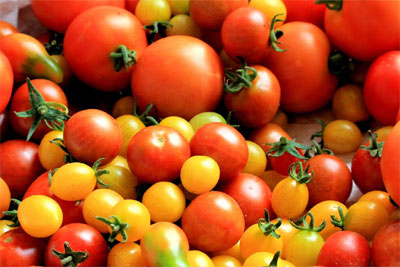 Are Tomatoes Safe for Dogs?

The answer to this question is ‘yes’. However, the owner should take care to feed only a small quantity of tomatoes to their pooch. Ripe tomatoes are believed to be non-toxic to dogs and hence can be fed to dogs occasionally in small quantities.

While the bright red, ripe tomatoes are considered safe for dogs, tomato plants, being a member of the nightshade family, the ones that include blueberries, bell peppers, and potatoes, contain toxins that can harm dogs.

The green parts of a tomato plant contain a toxin, tomatine, a cousin of solanine, a toxic compound found in other members of the nightshade family.

This means that dogs should never eat the leaves and stems of tomato plants, and also should never be fed green unripe tomatoes. Red, ripe tomatoes contain tomatine in a very small amount which cannot harm dogs.

Fortunately, to experience tomatine poisoning, a dog should eat very large quantities of tomato plants. However, in small breeds (weighing less than 15 pounds) and puppies (less than a year old), even a small amount of unripe tomato or tomato plants can result in poisoning only because their size is small.

Therefore, those who have puppies and smaller breed dogs should make sure they don’t feed or let their pup consume unripe tomatoes or tomato plants. 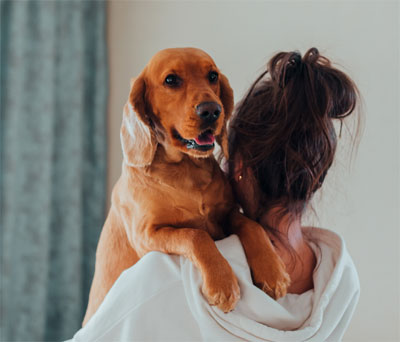 What Symptoms of Tomatine Poisoning to Look for?

How to identify if the doggo has consumed the undesired parts of the tomato without the owner’s knowledge? Tomatine poisoning shows certain symptoms from which dog owners can know if their doggy has secretly eaten green tomatoes or plants. These symptoms are vomiting, diarrhea, seizures, dilated pupils, muscle weakness, irregular heartbeats, arrhythmia, stomach pain, tremors, lethargy, loss of appetite, loss of coordination, drooling, etc.

A vet will fully examine the dog, and conduct blood tests or an ECG to detect if it's tomatine poisoning. If it is, the vet may induce vomiting or monitor the dog.

Some dogs may be allergic to tomatoes and show allergic symptoms. These symptoms include coughing, hives, licking feet, itching, difficulty in breathing, pink or red rash on skin or ears, gas or growling stomach, wheezing, etc.

However, these too occur rarely. But if they’re present, one should immediately call their vet.

Very, very rarely an allergic reaction may cause anaphylaxis which is a potentially deadly condition. Therefore, as soon as dog owner sees any allergic symptoms in their dog after eating tomatoes, they should immediately stop feeding tomatoes to their doggy and take them to the vet before the condition gets serious.

If the dog owner thinks that their doggy has ingested a large quantity of tomatoes or the tomato plant, they should contact their vet for guidance. It’s possible that the symptoms are of some other health condition beyond tomatine poisoning. Hence, it’s important to make sure what the problem is as soon as possible.

Some dogs may have certain medical conditions such as gastrointestinal conditions or acid reflux which can get aggravated with tomatoes. Therefore, it’s best to ask one’s vet before giving any new type of foods including tomatoes to make sure the doggy can eat them safely.

Are Tomatoes Beneficial for Dogs?

Ripe tomatoes contain tomatine in a very small amount. Hence, they are safe for dogs. Moreover, they offer many health benefits and so, they are good for dogs and are included in several pet food brands.

Tomatoes are low in calories but are packed with fiber, hence they support the dog’s digestive system.

They are also full of vitamins like vitamin B9 (folate) which is beneficial for cell functioning and tissue growth, C and K, minerals like potassium which is essential for muscle health, and antioxidants (which protects cells from free radicals) like lycopene which helps reduce the risk of heart disease and promotes strong bones and beta-carotene which improves cognition.

What Quantity of Tomatoes is Safe for Dogs?

Although tomatoes are not prohibited for dogs, feeding them too much of tomatoes can upset their stomach because of the acid content in them. Tomatoes should act just as a treat and should be fed to dogs in moderation and under supervision.

Dog owners should start feeding small amounts of tomatoes to their pooch to see how they react. However, they should feed it correctly. They should make sure they remove all the green parts and chop the flesh properly so that the pup finds it easier to eat it.

Roughly one large or two small ripe red tomatoes per week is fine to feed one’s doggo, once they show no allergic or toxicity symptoms. Still, one should confirm the right quantity with their vet.

The answer is ‘no’. Commercial tomato-based products like tomato ketchup, sauce, juices, and soups may contain additional ingredients like onions, garlic, salt, sugar, artificial flavors, and other ingredients which can cause stomach upsets in dogs.

How to Prevent Dogs from Eating Too Many Tomatoes?

If one has grown tomatoes in their own yard or containers, there is always a chance that their doggy may binge on tomatoes.

The dog owner should fence the tomato plants to prevent their pooch from gobbling up too many tomatoes. Or they can keep the plants somewhere out of the dog’s reach. And of course, they should keep an eye on their furry friend while preparing tomatoes for cooking to ensure their doggy isn’t trying to secretly grab some.

How to Serve Tomatoes to Dogs?

They should serve the tomatoes to the doggy in their fresh state without any additives like salt etc. Also, they should know the source of the tomatoes so that they can avoid any residues of herbicides or pesticides that can make their dog sick.

Some ideas for serving tomatoes to one’s four-legged friend are:

- The dog owner should wash the tomatoes well before feeding them to their dog.

- After washing, they can chop or slice them into bite-sized pieces (smaller pieces for smaller dogs to avoid any choking risk).

- They can chop the tomatoes, cook them and then mash or puree them, and then mix them with the dog’s regular food. Actually, cooked tomatoes are even better than raw tomatoes because the lycopene in tomatoes becomes easily digestible and absorbable after cooking.

- They can feed canned tomatoes without any seasoning or added salt to their doggy. 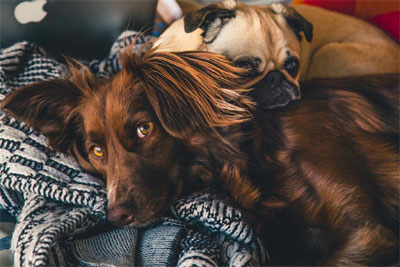 Can Dogs be Served Homemade Tomato Juice, Soup, or Sauce?

If the juice, soup, or sauce is made of ‘only’ perfectly ripe tomatoes i.e. without any salt, pepper, garlic, onion, or other additives it’s usually safe for the dog. However, the owner should be careful about the size. Just a couple of licks are fine.

If a dog owner is feeling guilty because they cannot feed their beloved doggo the food they enjoy, they need not! If they take care to feed the doggy foods like tomatoes in a very small amount, they can see the desired happiness and enjoyment in their doggy’s eyes.