One of the biggest problems with owning pets (of any kind) is knowing what you can feed them and what you cannot. There are so many potential menus out there, and it's always a good thing to see your pets as happy and healthy as possible. With that being said, can guinea pigs eat strawberries?

It's fine to feed strawberries to your Guinea Pigs. They may like it, or they may not. They have individual tastes just like we do. However, you do have to keep it limited. Too many strawberries too often will do more damage than it will do good.

This is especially true with smaller animals. You have to think of things in terms of scale. Guinea Pigs are mammals, and it's likely they can eat a lot of the things we can.

Unfortunately, their metabolisms are different, and they are much smaller than we are. 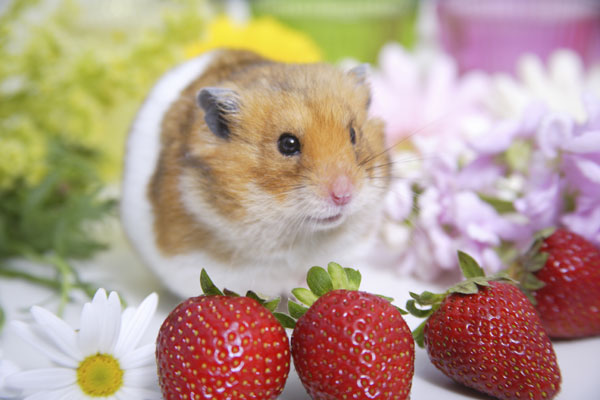 How Often Can You Feed Strawberries to Guinea Pigs?

At most, you should only give strawberries to Guinea Pigs once a week, and you need to keep it down as well—perhaps as much as one large strawberry and no more. A Guinea Pig’s diet consists of far more hay than fruit, roughly an 8/10 ratio of hay, and a 2/10 ratio of fruits and veggies.

Of course, we’re generalizing a little bit. The 80% and 20% amounts are not absolutes. They aren’t set in stone. For the most part, that’s the ratio you should stick with. Strawberries are interesting, and they will certainly be something new and exciting for your Guinea Pig.

In fact, you can add strawberries to their diet, once a week or less, in a way that replaces the traditional fruits and veggies they get throughout the week to make up that 20%. That way, it's a little safer and fairly standard for your Guinea Pig.

If your Guinea Pig’s diet is fairly standard at 20% fruits, pellets, and veggies, it won’t knock them for a loop if you make the strawberries part of that 20% instead of what they are used to.

Since it's new, you should be aware of the possibility that it might give your Guinea Pig little indigestion, with diarrhea a distinct possibility. It's like feeding your dog a very particular dog food brand for months on end, then suddenly changing to a new dog food brand.

It will give your dog’s digestive system fits, and the introduction of strawberries may do the same thing to your Guinea Pig. With a dog, you introduce the new brand of dog food in increments, slowly replacing the old food with the new. It's a good idea to use the same method as your Guinea Pig(s).

Advantages and Disadvantages of Giving Your Guinea Pigs Strawberries

We’ve already covered one of the major disadvantages above, with the potential for a hiccup or two in your Guinea Pig’s digestive system. It's a good idea to introduce strawberries (as a treat only) to your Guinea Pigs in stages. For instance, cut the first one in ⅓ and only give your Guinea Pig the ⅓ portion and no more.

There are a lot of advantages to feeding your Guinea Pigs, mostly in terms of the vitamins and nutrients they get from eating them. They aren’t supposed to have strawberries very often but when they do, it's a nutritional treat as well.

Vitamin C is the first and most obvious benefit. As with human beings, vitamin C ramps up a Guinea Pig’s immune system, making them more impervious to bacteria, viruses, and the various other things they can pick up from their environment and even us.

Strawberries are loaded with antioxidants. Some scientists even label strawberries as a superfood. Antioxidants work in a Guinea Pig’s body as they do in us, getting rid of free radicals and reducing inflammation.

Obviously, strawberries have sugar in them, and too much sugar, even when it's derived from a natural source, like strawberries, is a bad thing. It's even worse on Guinea Pigs since their bodies are so much smaller than ours. It means that too much sugar is more impactful on them.

If you include the stem and the leaves, Guinea Pigs are more than happy to consume those as well, which provides their bodies with a source of fiber. Fiber is good for helping the digestive system achieve bacterial balance, along with regulating bowel movements.

Anthocyanin is another compound found in strawberries, along with quercetin, and is responsible for lowering the risk of negative heart problems, lowering the bad cholesterol in a Guinea Pig, and increasing good cholesterol.

It always comes back to the sugar content. Fortunately, the sugar content in a strawberry is not as bad as it is in other fruits. However, too much is too much, and sugar is a major reason you should stick with small portions, infrequently given.

When a Guinea Pig gets diarrhea after eating fruit, it's mostly due to the sugar content. Their small bodies simply can’t handle it and regulate it as ours can. Even if they don’t get diarrhea, they will become obese if they get too much of it over a long period of time.

You also have to be concerned about where you got the strawberries. Non-organically grown strawberries could contain pesticides, herbicides, hormones, and other non-savory side chemicals that your Guinea Pig may have trouble dealing with.

It's always best to go with organically grown strawberries. Unfortunately, they are a lot more expensive, and strawberries don’t keep forever, in case you’re considering buying a whole bunch of them. Unless you have a horde of Guinea Pigs, the strawberries will go bad before you are able to give them out.

You should also wash the strawberries thoroughly. These are the kinds of fruits that grow close to the ground, and they tend to pick up a lot of dirt and other debris. Sometimes the dirt particles can be small enough that you don’t see them, but it will have an effect on the Guinea Pig’s digestive system.

Be sure to thoroughly rinse the strawberries before you give them to your Guinea Pigs. 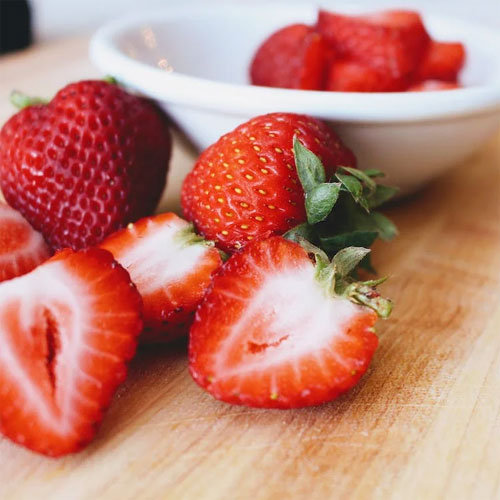 How to Feed Strawberries to Your Guinea Pigs

As we mentioned above, giving strawberries to your Guinea Pig for the first time should be done carefully and in very small portions. Allow their digestive system time to adjust to this new and interesting fruit.

Nearly a third of all Guinea Pigs will take one sniff of your offered strawberry and turn away. They just don’t like them. There’s a chance your Guinea Pig won’t like strawberries either, which is perfectly fine. After all, it's only for the purpose of providing them with a rare treat.

The remaining 66% will gobble them down without a problem. Start with half or even a quarter of a strawberry. All you want to do is determine if your Guinea Pigs even like it and how it will affect them afterward.

You can always feed your Guinea Pigs strawberries in slices or in quarters if that’s what you prefer. They won’t mind. Just keep an eye on them afterward. If you see signs of an upset tummy or they have diarrhea after, don’t feed them strawberries anymore. At least you will know.

How Many Strawberries Can a Guinea Pig Have?

It's only best as a snack, possibly once a week. The most you should give your Guinea Pig at one time is a single, whole strawberry. That’s only after you start off slow with slices and you’ve determined that your Guinea Pig can handle the strawberry.

You should also consider giving them the strawberry with a portion of the stalk and the leaves still attached. Even if your Guinea Pig doesn’t like strawberries, it may love the leaves and the stalk, which make a great source of fiber in their bodies.

If your Guinea Pig is more than capable of handling it, congratulations, you just found an incredibly healthy and delicious treat for your Guinea Pig, so long as you give it to them only in moderation and no more.

The goal, of course, is to have a happy and healthy Guinea Pig, and the occasional strawberry snack will go a long way toward achieving that goal. The nutritional value is immense, even though the sugar content holds it back from becoming a more prevalent food source.

Anything associated with a strawberry, such as jellies and other sweets, is an absolute and emphatic no. Just the strawberry alone will suffice, while all of those other things are borderline poisonous to Guinea Pigs. 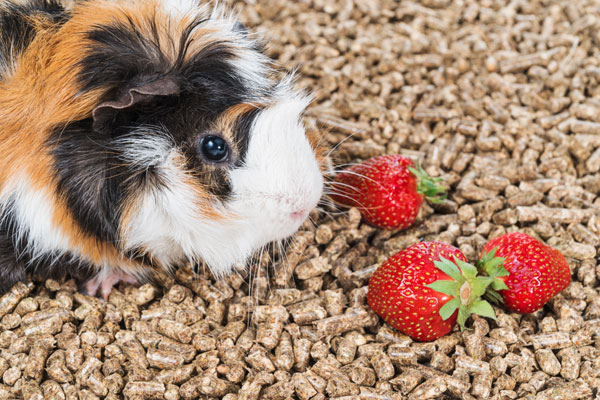 Strawberries are perfectly fine for feeding your Guinea Pigs if you do it in small increments and only once per week.

There is such a thing as too much, especially for an animal whose primary diet consists of hay and not superfoods.

If you feed them any more than that, you run the risk of making them very sick and possibly obese.