Cheap, energy efficient, durable LED grow lights are becoming more and more popular as home grow lights for both professional growers and for plant enthusiasts. Although certain plants prefer distinctive wave lengths, it is often the best practice to have grow lights that cover full spectrum of the sun light - after all, plants are using that kind of light for rather a long time :) 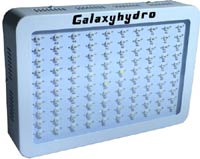 However, comparing various technologies of grow lights is not that easy.

First of all, there are few things that must be explained:

Note: operating IR (infrared) and UV (ultraviolet) LEDs look as if they are NOT working, but they simply emit light in IR/UV bands that can't been seen by human eyes.

- when comparing grow light efficiency, many people look just at produced lumens per spent watt of energy. In that terms, LEDs with 70-100 lumens per watt (and these numbers are improving with every new generation of LED grow lights) are as efficient as fluorescent grow lights producing 90-110 lumens per watt. Also, there is something called Photosynthetically Active Radiation (PAR). It is the measure of the actual light energy that is of value to the plants to promote growth, flowering and bearing fruits. Relative PAR value of LED grow lights is higher than of any other light source.

- LED grow lights are 'cold' lights since they operate at rather low temperatures, around 40-60°C, and because of that they can be positioned close to the plants. This takes advantage of the inverse square law for light - meaning that more light end up on the plants and not wasted around them. Also, since LEDs operate on low temperatures, they can be even positioned among the leaves (individual LEDs), not only above them, leading to stronger plant growth and bearing more fruits. This is very important when growing berries indoors, because plants can be tightly planted.

Note: even LED grow lights require cooling, smaller light systems use passive cooling, while larger ones require active cooling using small fans - no matter how you set these lights up, don't block the airflow, or your expensive LED light system could malfunction soon!

- initial price of LED grow lights is the highest among most popular grow lights (fluorescent tubes, High Pressure Sodium (HPS) lights, High Intensity Discharging (HID) lights etc), however, they are solid state devices and last for a long time, up to or even more than 50.000 - 100.000 hours (for decades!).

The next table shows short description and comparison between popular LED grow lights:

Note: Amazon links in the table open in the new windows, feel free to check them.

LED grow light bulbs are a set of LEDs, design to be used as 'drop-in-replacement' for incandescent of CFL (Compact Fluorescent Light) bulbs for growing indoors individual plants or for smaller indoor gardens.

One of their best features is that they fit standard light socket - just screw them into the socket and turn them on. Since their power is limited, their cooling is very simple, and they operate generally at very low temperature, allowing them to be placed relatively close to the plants.

Note: since LED grow light panels require more power than LED grow light bulbs, be sure that they are properly positioned from the plants to avoid too much light and to avoid increase in temperature around the plants.

LED grow lights often come with built-in, easy to manage, timers. These timers automatically turn light on and off - don't forget that many plants to grow properly require periods of darkness, especially for proper flowering. Therefore, when growing berries indoors, keep light on for not more than 17-18 hours, so that plants have at least 6-7 hours of rest. The optimum light and dark ratio depends on the species and variety of the plants - if you are not sure about this, keep the light on for 16-17 hours and your berries will do fine.

Combining automatic light timer with water pump timer creates growing system that requires almost no daily care, except for one thing - hand pollination and picking of the fruits.

T5 light tubes measure 16mm (5/8") in diameter and are known as one of the most efficient fluorescent tubes available on the market. They produce around 100-110 lumens per watt of spent energy, last 20.000-25.000 hours, come in different lengths (mostly as 2 and 4 feet tubes), operate slightly warmer than LED lights and are much cheaper than LED lights (5-10 dollars/euros per tube/bulb).

HPS grow lights are very efficient - they produce 140 lumens per watt of spent energy, but they operate at higher temperatures (around 500°F or 260°C) and must be kept away from the plants. Also, their initial costs are somewhat lower than costs of LED grow lights, but HPS lights initial costs are higher than fluorescent lights' costs.

Since they produce much heat during operation, they often require additional cooling, especially during summer. During winter, they provide both light and warmth to the growing plants.

HPS are part of High Intensity Discharge (HID) group of lights that generally operate between 500 and 600°F (260-315°C) and produce at least 125-130 lumen per watt of spent energy. However, all these systems require the bulbs, sockets, reflector and a ballast, not to mention additional cooling of growing area during warmer months.

Call me biased, but for growing berries indoors, mostly strawberries and similar berries, one wants to plant as many plants as possible in available area and wants to cut initial and running costs as much as possible. 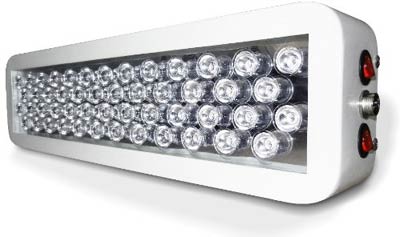 LED grow lights are still being perfected, but keep in mind that LED grow lights from the '90s are still working! Many people complain that certain LED grow lights are good for green vegetables (lettuce and similar plants, including herbs) and are not as good for fruits and plants like tomatoes, eggplants and similar. Such LED lights often lack certain wavelengths, or they are too weak - red light, 600-640nm, is very important for flowering and bearing healthy fruits.

If you like DIY activities, make two shelves, one with full spectrum LED grow lights and one with fluorescent tubes (T5 or  good Compact Fluorescent Light (CFL) highly recommended) and test your berries during at least one full season.

Long Story Short - for newbie indoor growers, there are all-in-one systems based on full spectrum LED grow lights. Feel free to test them.

However, if you don't mind higher initial costs, full spectrum LED grow lights are a way to go, especially if one can find them on a sale :)

Even if not found on a sale, LED bulbs and panels are becoming cheap enough to be considered as the main light source for any indoor garden, grow cabinet or tent.