Hornet vs. Wasp: What’s the Difference between Hornets and Wasps?

Hornets are, by definition, a kind of wasp, but what distinguishes this species of wasps from others is their rounder appearance, as well as their black and yellow striped bodies. Other types of wasps tend to be slender in appearance with red, black, or blue colors.

While hornets may be a type of wasp and share a number of similarities, the species of wasp you have residing in your garden is important to keep track of. Some species are a lot more aggressive, harmful to your garden, and a lot more painful should you be stung. 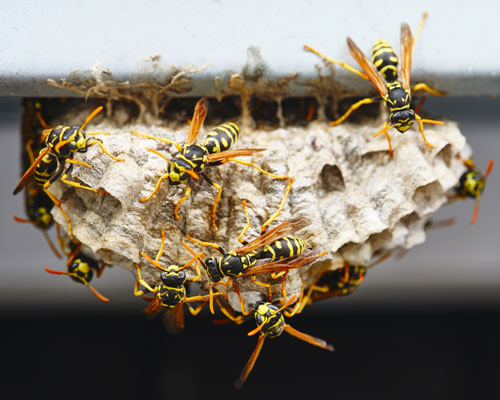 The rest of this article will dive into the main differences between wasps and hornets to determine what you can expect from their behavior.

Both wasps and hornets belong to the Vespidae family, of which there are over 100,000 species. As mentioned, hornets are a subspecies of wasps with their own distinctive behaviors, anatomical features, and life cycles.

When they’re buzzing around your garden, you’ll be able to distinguish hornets by their bee-like yellow and black coloring, as well as their larger bodies and wider heads.

Hornets are the largest subset of wasps and quite distinct, given their size. Wasps are, by nature, predators and will prey on other insects in your garden.

They are highly protective of their nests, but if you see a hornet, then beware; hornets are very aggressive when compared to wasps, and their sting is known to be quite painful.

The Life Cycle of a Wasp

Wasp season starts anew every spring when the queen comes out of hibernation to start her new nest. She finds a suitable location to set up and chews wood to create a papery substance for it. At the center of the nest, individual petioles house cells for eggs.

Once hatched, these eggs become larvae, which are fed a diet of protein, mainly insects and bugs.

The larvae eventually pupate into an adult wasp, either male or female. The males are responsible for continuing the construction of the nest, feeding other larvae, and collecting food for the nest members. 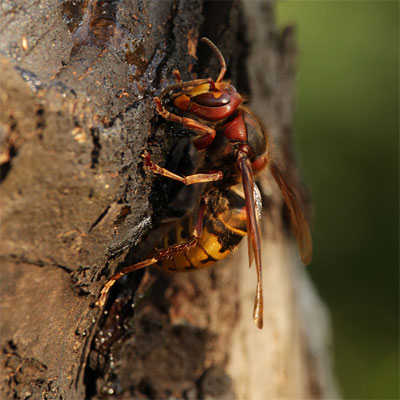 The infertile females are also tasked with food gathering, although they also serve a much more prominent role in defending the nest from invaders.

Unfortunately, that includes you minding your own business trying to enjoy a barbeque. The activity and aggression of wasps pick up right as people are enjoying the cooler outdoor weather, and spring is the most likely time that wasps will try to sting you.

Most species of wasps, hornet in particular, are aggressive by nature, especially if you disturb their nest. With all the hubbubs of a new colony being started, they can get pretty hungry. Drones and infertile females prey on insects and feed them to their larvae. The larvae, in turn, secrete a sugary substance that the wasps consume.

This life cycle continues all through summer and into the fall when all of the new virgin queens have left the hive to find mates, and larvae are all grown up, denying the adults their food source.

If you’re keeping an eye out, you might notice that wasp activity tends to ramp up and get particularly annoying near the end of fall as the wasps search for some sugary goodness to eat. That includes sugary drinks like beer and high-protein foods like meat and flowers.

Eventually, the wasps will die off in the winter, only for a new queen to form a nest the following spring.

How Does the Hornet’s Life Cycle Differ?

The life cycle of a hornet is much the same as a wasp, going from egg to larvae, to pupae, to adult. The main difference between the two is that hornets are generally more aggressive than wasps and have a more painful sting to boot.

When a wasp or hornet attacks, pheromones are sent out, alerting the nest to a potential threat.

This serves the purpose of mobilizing the wasps/hornets to attack the intruder in unison.

These pheromones also see use when the wasps are attacking groups of prey, honeybee hives, or other Vespa species. One thing that will be much more noticeable about hornets as opposed to wasps is the size of their colony. 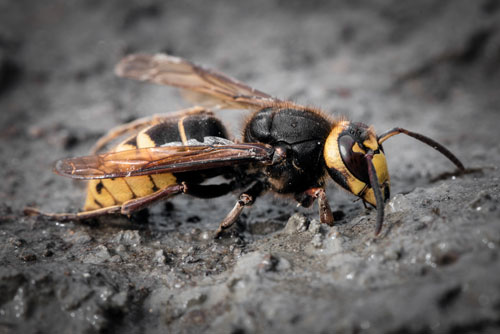 A thriving hornet population can range from 100-400, all of which can fit inside a prize-worthy paper mache-like nest that can be as big as a basketball.

Wasp nests are generally much smaller and have that distinctive comb shape, housing 20-30 members. As such, when it comes down to the most important detail, hornets are a way bigger problem in your yard because they are more aggressive and live in a much larger colony.

It’s also worth noting that some species of wasps are solitary, and some of them are even beneficial to human endeavors. These wasps will often take down other pest insects and use them to lay their eggs in.

In social colonies, adult wasps may exclusively feed on the sugary substance larvae produce, meaning that they have no food during the winter when the larvae grow up. On the other hand, solitary wasps can do it all—bugs, meat, and nectar—to feed themselves.

As such, it’s really these lone wolves that are beneficial in your garden since their numbers won’t get out of hand, their nests are underground, and they will tackle pests for you. In fact, solitary wasps are often introduced into a crop-rich environment to protect them from unwanted pests.

Are Wasps or Hornets Good to Have Around?

Given the knowledge that wasps and hornets are predators with a penchant for attacking anything near their property, they’re definitely not neighbors you’re looking to invite over any time soon.

With that being said, wasps do offer some benefits to your garden. First, contrary to popular belief, wasps do play a role in pollination, just not to the same extent that bees do. In addition, wasps will keep pesky caterpillars and other insects from eating your plants, helping your garden thrive in the long run.

Most common wasps are benign if you keep at least 6 feet away from their nest and won’t tend to be aggressive if you happen to walk past one just minding its own business, although aggressiveness can vary by species.

Hornets offer the same benefits as other wasps, but they do tend to be a lot more aggressive, have larger nests that are harder to avoid, and are active in much greater numbers.

How to Keep Wasps and Hornets Away from Your Home

Even though wasps can have some benefits, if you’re dealing with some particularly nasty neighbors and have been stung before, then it’s probably best to discourage them from hanging around, especially if you are allergic to their stings.

Before discussing some of the common ways you can discourage wasps from hanging around your home, it’s worth taking a moment to talk about large hornet nests. Please do not mess with them under any circumstances. 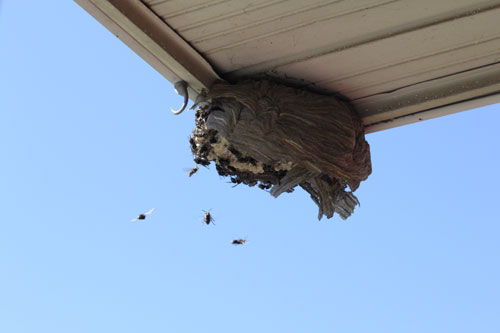 These giant, looming paper structures can house hundreds of hornets that can sting repeatedly and inject venom. Individually, these stings are just painful. But a swarm of hornets can be a deadly force and serious injury or even kill you. Leave large, noticeably occupied nests to the professionals and contact a pest removal service.

With that aside dealt with, let’s discuss how you can keep both wasps and hornets away from your garden or backyard.

There are a number of substances and ingredients that wasps absolutely hate, and most of them are easy to obtain and are perfect for spraying around your home. A combination of lemongrass essential oils and a touch of clove and geranium is the perfect recipe, but you can also use just plain old peppermint oil to see those pests off.

Mix with water and dish soap in a spray bottle and coat problematic areas around your home. If you remember where you’ve had nests in the past, make sure to cover that area thoroughly. They love to net in all the little nooks and crannies of your home, so targeting secluded areas is ideal for the best results.

Meats and sweets are both attractive to wasps, as well as a host of other creepy crawlies that you don’t want around your home. The most common place wasps will find this food is in your trash can, so always make sure that your trash is taken out nightly and put in a sealed container to prevent anything from gaining access to it.

Sealed lids are ideal, but if you don’t have them on hand, a pair of bungee cords will do the trick to keep your trash safe. If you find wasps circulating around your compost pile, you might consider composting indoors instead.

Wasp traps work on the simple principle of luring wasps into a container and then preventing them from escaping. DIY wasp traps can take just 5 minutes to make and be highly effective.

Just keep in mind that traps alone aren’t going to solve your problem since you’re just as likely to catch wasps passing by as those building nests.

Preventative measures are important to discourage wasps from building nests. When females are looking for places to set up a nest, they’re looking for secluded spots such as under your eaves or on your porch roof.

Using a combination of caulk and sealant can help you plug up those cracks and holes to allow fewer spaces for wasps to build their nests. Tempting spots you can’t patch up should be sprayed with a wasp repellant.

Going on the Offensive

It’s almost never advisable to tackle a large nest by yourself, but if you’re going to take the job on, all you’ll need is two tablespoons of dish soap mixed with water. Put the mixture in a spray bottle, preferably one that can spray at a good distance, and soak the nest.

Doing this at night while the wasps are inert is a good strategy to give you time to make your getaway. Similarly, staying more than six feet away makes it harder for the wasps to detect you.

Once the soap hits them, it clogs their breathing pores, referred to as spiracles, killing them almost immediately. Upon impact, you can wipe out a good number of these pests and likely kill most of the others over time.

Repeat this treatment as necessary until the nest displays no signs of activity. Keep in mind that wasps do have the ability to recognize faces, which suggests that they might associate you with danger if you continually assault their nest.

It’s just another good reason why you should avoid antagonizing them where possible. 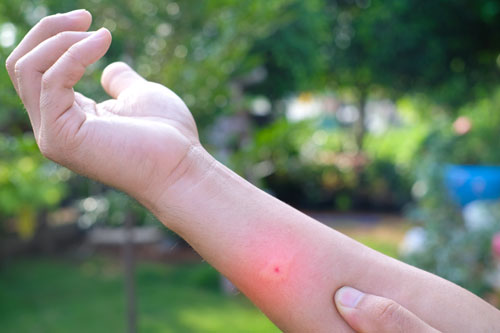 Sometimes, the scope of the problem is just way beyond what you’re able to handle yourself. Whether the nest is secluded in a place you can’t reach, or the wasps are just getting too aggressive around your garden, pest control companies are trained and well-equipped to handle pests of any kind and make sure that they don’t return.

When it comes to large-scale problems, trying to take on a nest by yourself is a recipe for disaster, which is why you should exercise discretion when trying to handle wasp or hornet problems.

Hornets are a subspecies of wasp that tends to be aggressive and builds much larger, densely populated nests. The key difference between the two is their physical appearance and, to some degree, their level of aggression.

If the wasps aren’t bothering you, then having some free pest control in your garden or around your home might be to your benefit.