How to Get Rid of Japanese Beetles

While Japanese Beetles are more or less harmless to you and me, they can seriously damage your garden, especially those berry bushes and rose bushes. They feed on more than 300 plants throughout the United States and have cost the country more than $450 Million to control!

So obviously, no one wants these little invaders in their backyard gardens. But how do we get rid of Japanese Beetles? What can we do to protect our plants and flowers?
Everything from handpicking them to insecticides to traps can help eliminate Japanese beetles in your garden.

In this article, I will go into more depth about the Japanese Beetle, how to spot an infestation and what to do about it. 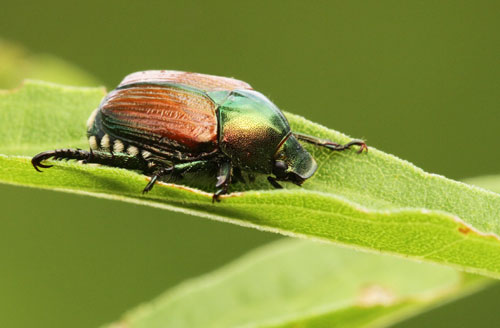 What Are Japanese Beetles?

As the name implies, these little insects originate from Japan, and before 1900, they were only found on the islands of Japan. Despite a law against importing plants rooted in soil, the Japanese Beetle soon found its way to the United States.

Scientists believe that the beetle entered the country as grubs in the soil of Japanese Iris plants. Attempts to eradicate them were finally put by the wayside in the 1920s because the beetles made it clear they were here to stay.

These little buggers have a fairly wide array of tastes in plants and have become one of the major pests in the United States when it comes to gardening.

How Can I Spot a Japanese Beetle?

Adult beetles have a very distinct greenish bronze on their back. They are about ½ inch long, and their front wings are the color of copper.

They have shiny green heads and small white hairs on their underside. You are most likely to see them in groups as they feed together.

Do They Do Much Damage?

Unfortunately, the Japanese beetle is more than happy to destroy your gardens as they don’t discriminate on vegetation. You will most likely see damage on your grapes, raspberries, beans, and roses, as these are their favorite snacks.

Here are a few sure signs that you may have a problem with the Japanese Beetle.

Brown, Ugly Patches on Your Lawn

When the Japanese Beetles pass their time in the winter season, the grubs feed on the roots of your lawn and yearly garden plants. This is what causes those brown patches of withered, dying grass in your yard that are suffering from weakened roots.

Plants That Seem to be Wasting Away

When Japanese Beetles eat, they chew the leaves between the veins of the leaf, which gives your plants that lacy skeleton look. This is almost always the destruction caused by the Japanese beetle.

How Do I Get Rid of Japanese Beetles?

Since they can be a major problem in your garden, it’s best to get rid of Japanese beetles as soon as possible.

These bugs are not native to the United States, which means they don’t have any natural enemies, so it’s up to us to take care of them.

Pick Them Off the Plant

Luckily these guys are fairly easy to spot, so you can easily just remove them by hand. They are not biters or pinchers, so you don’t need to worry about that.

I would personally wear gardening gloves because I am extremely creeped out by beetles. They don’t move too quickly, so you can easily just flick them off. While it is a bit more time-consuming, it’s the most effective way to deal with them.

Have a bucket filled with hot, soapy water with you that you can put the beetles in, which will cause them to drown. 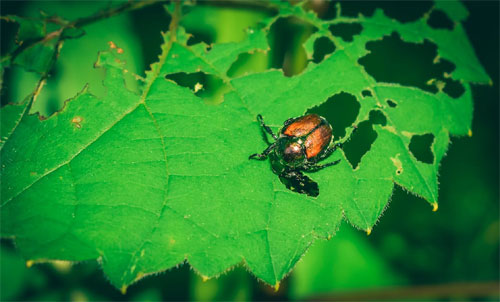 Douse Them in Neem Oil

Neem oil is great at killing the beetles before they reach adulthood. It contains potassium bicarbonate which is especially effective on roses. You can spray the oil directly on your plants without harming them.

When the adult beetles ingest the oil, it passes onto their eggs, killing the larvae before they become adults. So if you can spray your little offenders before they reach adulthood, you have a good chance of stopping a vicious cycle.

Neem oil does need to be reapplied after rain, and because it can be harmful to some types of fish, don’t use it close to rivers or ponds.

Traps are a great way to keep your beetle problem from worsening, as they lure males away before they can procreate. There are a few different kinds of traps you can try, some use a certain chemical to attract the beetle, and some trap them so they can’t escape.

Japanese Beetle traps are baited with a pheromone chemical that will attract a fair number of beetles. The key here is to place the traps away from your plants because they tend to attract a lot of beetles and the last thing you want to do is call attention to your plants.

Doing so will help keep neighborhood beetles from coming and discovering your crops, giving you a worse problem.

Row covers are another great solution to getting rid of your Japanese Beetle problem. Row covers will provide protection from the beetles but still let enough light and moisture in for your plants.

Peak feeding times for beetles are about 6 to 8 weeks from mid-June to mid-August or mid-May to late June if you are in the Northern part of the country.

Row covers come in a few different sizes and can easily be used on shrubs or placed over your vegetables or flowers. The only downfall of row covers is that along with keeping pests out, they will also keep out pollinators, so remove the covers on plants that need to be pollinated.

Make a Soap and Water Solution

A basic solution of hot water and dish soap will suffocate these little pests easily. Mix a quart of hot water with roughly a teaspoon of dish soap. Once mixed, empty the solution in a spray bottle.

Don’t be afraid to get aggressive because once you spray the beetles, they should drop to the ground, hopefully dying or becoming food for predators.

Nematodes, a type of parasitic roundworm (sounds lovely, doesn’t it?), can be beneficial in the fight against Japanese Beetles. They can be found in several different environments and will eat almost anything from bacteria, plants, animals, and humans.

Both Steinernema and Heterorhabditis are effective at controlling Japanese Beetles and other pests. These can be easily found at most garden stores or online.

Follow the directions on the manufacturer’s bottle for the best results.

Go Above and Beyond With Your Roses

If you cherish your roses, you need to go above and beyond for them when it comes to Japanese Beetles. Be sure to prune and treat them before they bloom. 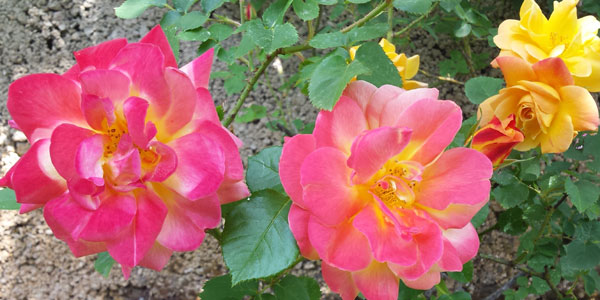 After the first flush of the season, prune your roses back even further than you normally would, as this can help ensure that any offending beetles will be gone before your roses flush again. Remove any remaining beetles by hand after you are done pruning.

Another trick with your roses is to cover them with a mesh, which can also be found at most gardening stores or online. Be proactive and spray your roses with neem oil to help prevent any grubs from maturing.

Fall in Love With Geraniums

Besides being visually appealing, geraniums are another way to control Japanese Beetle infestation. These plants are a natural deterrent when it comes to keeping insects from nearby plants. I like to think of them as the neighborhood protector.

You almost feel bad for the little guys when you learn that the Japanese Beetle will become paralyzed within a half hour of consuming geranium petals. They fall onto their backs, and their legs and antennae begin to twitch, and then they can’t move for over 24 hours.

While this “poison” will gradually wear off, the beetles are left very vulnerable and often face a predator's jaws.
Pay Close Attention to Where You Plant Things
Gardening experts will advise you to consider where you plant certain plants. The sugar content and odor of certain plants are important to keep in mind when it comes to determining how susceptible they are to attacks by the Japanese Beetle.

Plants with a high dextrose level will attract more beetles (is that any surprise?) and likely suffer more damage than those with a low concentration of dextrose. To avoid a major infestation, don’t put plants with high sugar content together.

Some examples of plants with high dextrose are:

The best way to prevent garden pests, in general, is to be proactive and keep your landscape in tip-top shape. Removing poorly nourished trees, as well as any diseased fruits, can help. Here are some other tips to try to keep them at bay.

By introducing milky spore, a fungal disease, to your lawn, you can help stop the growth of Japanese Beetle larvae. Grubs will ingest the milky spores in your soil as they feed, leading to their demise.

This treatment can be expensive, and one must be patient. In order to be effective, the spores need to be in the soil for about three years prior, but once established, they will remain for years to come.

Choosing the right companion plants can be very useful in preventing Japanese Beetles and other pests. Many plants are a natural deterrent for them and should help to keep them away. These plants include: 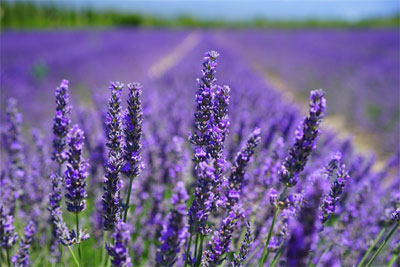 Go After the Grubs

Grubs are active in the late spring and fall (yes, Japanese Beetles have TWO life cycles!), so it’s best to attack during those times. Dilute about two tablespoons of dish detergent in 1 gallon of water per 1,000 square feet of lawn.

This will cause the grubs to surface and give the birds an unexpected lunch. If you have chickens, even better!

Spray weekly to prevent any more grubs from surfacing.

I won’t lie; I HATE wasps more than anything. But in some cases, such as riding your garden of Japanese Beetles, they can be beneficial.

Parasitic wasps are natural predators of the beetle, and while they will readily attack any existing larvae, they are not overly effective in getting rid of a full-blown infestation.

Using a dropcloth can work as a net to catch the beetles. Place the drop cloth over your plants in the evening, and in the morning, you should have a decent collection that you can deposit in a hot and soapy water bucket.

If you wish to use a true insecticide, reach out to your local garden center about the approved treatments in your area.

You can also try a homemade solution using one teaspoon of dish detergent with 1 cup of vegetable oil. Shake vigorously and add to 1 quart of water and then add 1 cup of rubbing alcohol and shake hard again to get the product to emulsify.

Put the mixture into a spray bottle and use it directly on the beetles, waiting ten days between each treatment. It’s best to use this spray early in the morning and never in full sun. Also, avoid using if the temperatures will reach over 90 degrees.

If you notice our plants wilting, rinse them off right away with clean water. Because homemade sprays are more apt to damage leaves, you want to use them sparingly. 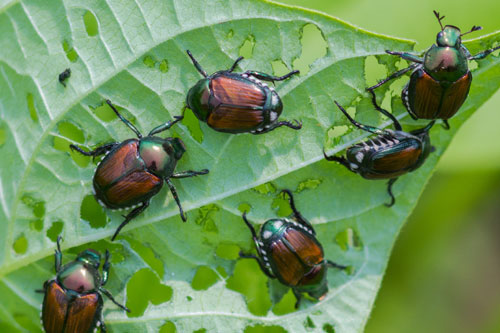 One Quick Word of Caution

It would be unethical of me not to first warn you that many sprays and powders used to get rid of pests are very toxic to our precious honeybees and other pollinators.

If you must apply a product like this, do not apply it during the late morning to mid-day, as this is when bees are most likely to be active.

If you need to treat a very large area, it may be best to contact a beekeeper first to be sure the colonies are protected.