A very tiny plant that attracts everyone with its beauty and offers calm and quiet to one’s mind, simply with its green expanse and sometimes tiny, colorful flowers is grasses!

Grasses occur everywhere (except on the south pole). A lot of them are not native to places where they occur. When it comes to North America, it’s believed that around 11% of the grasses are non-native.

They’ve been introduced here by traders and travelers. Most of these non-native grasses are considered to be invasive and a threat to other native grass species. To protect the native North American plants from the danger of extinction, conservation methods and management policies are required. 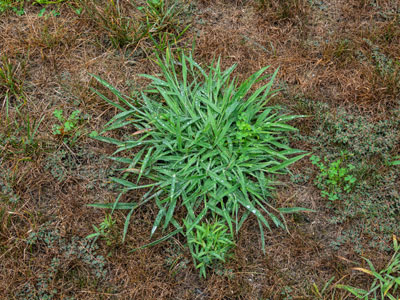 What are Invasive Grasses?

Some are native too but have the potential to outcompete other native grasses in communities where they often would be only minor components or absent from the plant community. Loss of native grasses negatively affects forage and watershed functions and can cause land degeneration and erosion.

The invasive grasses are introduced species that, in some regions, are able to create dense stands and negatively alter the native plant communities.

While these species replace major proportions of native plant communities, they may even modify vegetation structure, the fire regime, soil erosion rates, hydrology, and forage production. These changes, in turn, can have considerable effects on livestock production as well as wildlife populations.

Also, some species that are considered invasive in some areas are considered beneficial in other areas and are recommended for planting. Examples of these are smooth brome (Bromus inermis) and Kentucky bluegrass (Poa pratensis).

Invasive grasses are simply weeds that have a competitive advantage over the rest of the plants in one’s lawn. In other words, they grow faster, taller, and thicker than the rest of the grasses in their lawn, which can soon cause them to crowd out and choke off the growth of other grasses.

While some invasive grasses may not be a big problem and can, in fact, add some variety to one’s lawn, others can lead to extensive harm. For example, quackgrass is an invasive grass that has been known to grow through concrete.

Invasive weeds can crowd out one’s desirable grasses, causing bald patches on their lawn and allowing them to spread further.

Poa annua or annual bluegrass, is a small, tufted grass that occurs commonly in lawns. It has a light green to blue-green color and grows into a dense mat. Since it can germinate quickly, it can be problematic, which means it can outcompete one’s desirable grasses for space, nutrients, and water.

It also forms a lot of seeds, which can soon cause a large infestation if left unrestrained. This grass normally dies during the hotter months or when there is no rain. In a way, this is good because the weeds will die as well.

However, it’s bad too because the bald spots will appear as it dies out.

Getting Rid of Annual Bluegrass

Also known as tropical signalgrass or creeping signalgrass, Alexandergrass is a perennial weed and has flat, hairless leaves. This weed is native to tropical and subtropical regions but can be seen even in temperate regions. It can grow in a wide range of habitats, including lawns, agricultural fields, gardens, and pastures.

This species of plant has a very powerful growth rate and if not managed properly, it will soon overrun the lawn. It’s also very drought-tolerant, which means it can survive periods of dry weather when other grasses would struggle.

Also called finger grass, crabgrass is an annual invasive grass that resembles a lot to Bermuda grass. It can grow in several places, but one will usually find it growing on lawns and can spread at a very high rate. It typically begins sprouting in small areas of a lawn but will soon branch out in circular areas over a period of time. 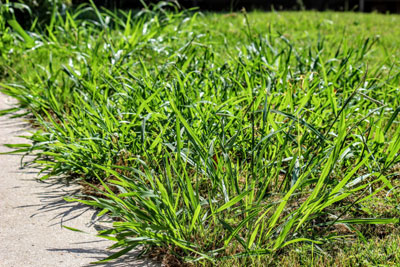 Crabgrass’s structure is rougher and coarser than most grasses. This may help one distinguish it from the rest of their lawn. This weed is a problem since it can rob one’s other grasses of vital nutrients, water, and sun. this can create bald patches and, in general, an unhealthy lawn.

Crabgrass is an invasive grass that can quickly spread and lead to permanent damage to other plants if left unrestricted.

Getting Rid of Crabgrass

For more about this topic, feel free to check our How to Get Rid of Crabgrass Without Chemicals article.

Setaria viridis, or green foxtail, is an annual grass that germinates in the spring. It’s a very quick-growing weed that can spread fast and takes over spaces of lawns, gardens, meadows, prairies, and pastures. The plant has long green leaves that have a fox tail-like look, from which it gets its name. 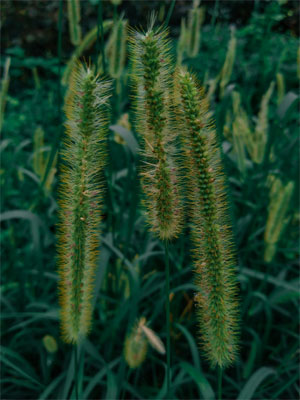 This weed is usually confused with other grasses but still can be distinguished by its seed head, which is made up of several small spikelets. This weed can grow to be quite tall, sometimes attaining a height of even 2.5 feet or even more.

This weed forms a large number of seeds, which are dispersed by the wind. This means that it can rapidly spread to other spaces and become a problem.

Getting Rid of Green Foxtail

Cyperus rotundus or nutsedge is a perennial invasive grass that can occur in several parts of the world. It’s a fast-growing weed that spreads rapidly and can easily take over lawns and gardens.

The main difference between nutsedge and crabgrass is that nutsedge is perennial, meaning it’ll last for two growing seasons if not eliminated.

This disruptive grass propagates through subterranean rhizomes/tubers as well as seeds carried by the wind. Due to this, it can soon spread to lawns from nearby farms.

Getting Rid of Nutsedge

Elymus repens or quackgrass, is a very common type of invasive grass that occurs throughout North America. It’s a perennial grass that spreads through its seeds as well as rhizomes (creeping roots). This makes it very tough to get rid of once it’s established in one’s garden. 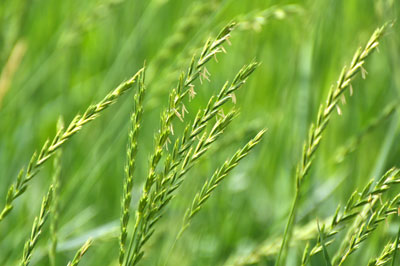 The weed has been named after its distinctive seed heads, which look like the tail feathers of a duck. Its leaves too are quite unique, being much wider than most other types of grass.

Getting Rid of Quackgrass

Bromus inermis, or smooth bromegrass, is a perennial grass native to Asia and Europe and has been introduced to North America. It’s usually used as a forage crop or turfgrass but can become an invasive problem in some regions. 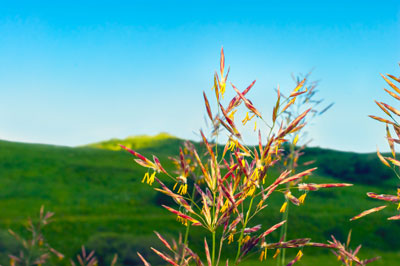 This perennial weed thrives in difficult environments (including cold climates). It spreads via rhizomes in the ground and develops a strong root system.

Smooth bromegrass is harmful too as it encourages excessive growth and destroys surrounding vegetation. It has a fast growth rate and a robust root system that make it a perfect ground cover. It can even be used as hay.

Getting Rid of Smooth Bromegrass

Juncus tenuis, or slender rush, is a kind of invasive grass native to Europe and has been introduced to North America. It often occurs in wet areas like ditches, marshes, and swamps.

It’s a fast-growing grass that can rapidly spread and take over an area. It propagates via ground tubers and seeds, which are dispersed by the wind. The weed forms thick mats which can crowd out other plants.

Getting Rid of Slender Rush

Festuca arundinacea, or tall fescue, is a grass that’s native to Asia and Europe but is now established in North America. It’s usually used as erosion control, turfgrass, and forage crop.

This is a pesky weed that thrives as dense clumps and spreads through rhizomes underground. It’s resistant to severe weather conditions, which makes it difficult to kill. Actually, its leaves look similar to succulent stems.

Hence when this weed infests a lawn, the lawn grass cannot compete and dies as a result.

Getting Rid of Tall Fescue 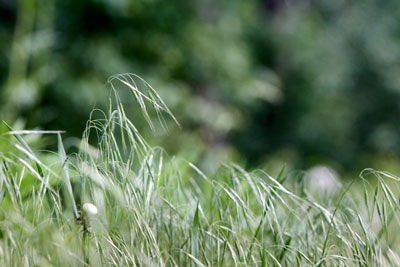 It has a tremendous potential to alter the ecosystems it invades, and it can totally replace native plantations and can change the fire regime.

Areas that once experienced fire once every 30-150 years may experience fires once every 3-5 years once cheatgrass is established in it. It’s also bad for wildlife like pygmy rabbits, mule deer, and sage grouse that depend on intact sagebrush steppe for survival.

Getting Rid of Cheatgrass

Homeowners should pull small areas by hand in the spring. Having shallow roots, cheatgrass is easy to root out before it sprouts and spreads its seeds.

The history of Poa pratensis or Kentucky bluegrass (also known as KBG) in the US is quite complicated.

Although it’s commonly grown in pasturelands, particularly in the northcentral and northeastern regions of the country, as an important persistent perennial cool-season forage species, it’s listed as an invasive weed in Wisconsin and the Great Plains. 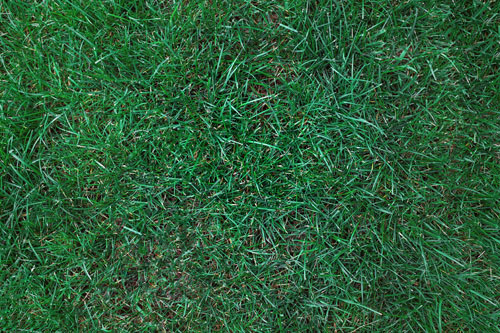 It was originally discovered in Northern Asia and Europe and was introduced in the US as a pasture grass in states like Kentucky, from where it got its name. It’s a popular lawn grass in residential and commercial landscapes due to its beauty and dark green color.

Although it’s a cool-season grass, it’s versatile enough to survive and flourish in warmer conditions. It's not uncommon to find KBG in lawns in the West and Southwest parts of the US if they receive a lot of sun and the soil is extraordinarily moist.

Getting Rid of Kentucky Bluegrass

Pennisetum ciliare or buffelgrass, is a perennial, invasive grass that is immune and highly resistant to drought and can choke out native grasses. 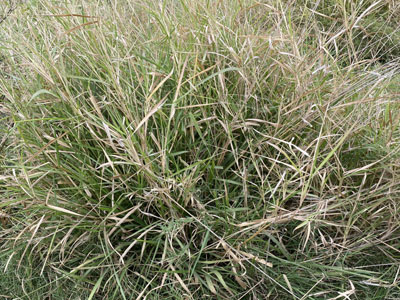 This tall grass burns quickly when dry if ignited, which makes it particularly hazardous during wildfire season.

Getting Rid of Buffelgrass

Phalaris arundinacea, or reed canarygrass, has native as well as non-native strains in the United States. Asian and European varieties have been introduced and grown for livestock forage and wastewater pollution control. 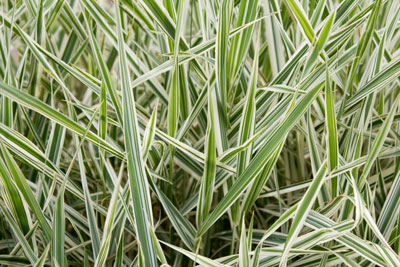 The non-native varieties and hybrids of non-native and native varieties are aggressive in several environments and have the potential to shade out and displace desirable plants. It’s very competitive, once established, and will often develop a solid monoculture.

Getting Rid of Reed Canarygrass

Invasive grasses can be a headache for gardeners as well as homeowners. They can soon take over an area and crowd out other vegetation.

Although there are many ways to remove invasive grasses, the best approach is to prevent them from appearing in the first place.

Also, while using chemical treatment over invasive species, gardeners should remember that more is not always better when it comes to herbicides.

In fact, solutions of herbicides, if made too strong, may lose the ability to injure the target plant. Therefore, they should always follow the recommended rates on the label.