Pine straw mulch can be very beneficial to your garden, and it’s a lightweight product that is often pretty eco-friendly.

It’s also cheaper, a good insulator, and retains moisture well – but it won’t prevent weeds. It should last for a few years before it breaks down and disappears into the soil. 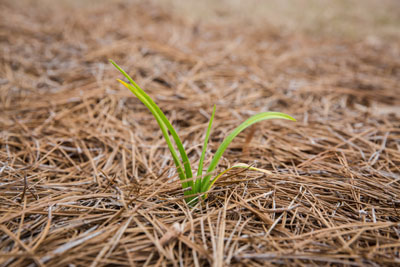 We’re going to use this article to explore the pros and cons of pine straw mulch and understand why it is beneficial when used in your garden.

This will help you determine whether it’s something you should consider purchasing or whether another form of mulch would be better.

One of the biggest factors that most people need to consider when it comes to doing anything in their gardens is the cost. Outdoor work can be extremely expensive, especially if you are dealing with large areas. Mulch generally has to be applied in thick layers to be worth applying at all, and this means it is often a pricey task.

Wood mulch can get very costly fast because it depends on a fairly expensive raw material. However, pine straw mulch tends to be noticeably cheaper because it is made up of a waste material that is available in abundance.

Pine straw mulch prices can vary, but it will often cost around $3 to $5 for a 2 cubic foot bag. Some garden centers and nurseries may have sales that make it even cheaper. A bag will cover 12 square feet, meaning that you can do over 30 feet for around $10 to $15. That’s not bad at all.

If you are going to cover a bigger area, you might want to buy a bale of pine straw mulch. Again, costs will vary, but a bale is usually around $4, and it can cover about 50 square feet. That means you could do 100 square feet for less than $10.

Obviously, how deeply you’re mulching will affect how much it costs, but overall, pine mulch is inexpensive. To do the same areas in wood mulch would often cost around 3 times more, depending on the prices in your local area and the deals available.

This is one of the big attractions of pine straw mulch and should certainly prompt you to consider using it.

If you have ever had to shift bags of wood mulch around, you’ll know just how heavy these can be. This makes laying the material a serious chore that is slow and difficult. By contrast, pine straw mulch is reasonably light.

Compared side by side, wood mulch tends to be around 3 times heavier than pine straw mulch. If you’re laying several square feet of it, you’re pretty quickly going to start noticing that difference.

This also makes pine straw mulch much cheaper to ship, which helps to keep its overall price low. The weight of the mulch might not be the first thing you think about when you’re deciding what kind of mulch to use in your garden, but it’s surprisingly important.

Appearance doesn’t matter to everyone, especially in the outdoor world, but pine straw mulch certainly has a rustic sort of appearance. If you are putting it in a part of your garden that needs to look pretty, you might have to consider this.

Pine straw mulch tends to have a wild, rugged look, with its tendrils sticking up all over the place. It is very difficult to make it look tidy, and it won’t stay that way even if you succeed.

Most people won’t care about this, but if you are working in an area where appearance matters and you need the mulch to look good, you might want to think about using wood chip mulch instead. This can be purchased in your desired color to make it blend with the surrounding features, and it looks much neater.

Pine straw mulch should last for several years, and this is one of its major benefits. However, you should be aware that it will gradually compact over time, and you’ll need to get a rake to “fluff” it up and keep it light.

This can be done in spring when the heavy winter rains have stopped, and then you can top it up with more mulch if necessary.

If you want to remove the pine straw mulch rather than allowing it to decompose, you can usually just rake it up. This tends to be a quick and easy job because of the long strands.

This is another benefit that it has over the wood chip, which is harder to rake up and remove. 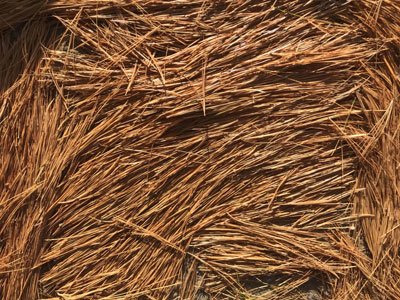 5) Pine Straw Mulch Is Not Good Against Weeds

Some people use mulch as a means of suppressing weeds over the winter so that they don’t have to deal with lots of growth the following spring. This is a great way of reducing your gardening tasks and making it easier to stay in control of the yard work.

However, pine straw mulch is not well suited for this task. Unlike many heavier, denser mulches, it does a poor job of blocking out the light and oxygen and will allow too much to reach the surface of the soil. Because they can still get light, water, and air, the weeds will continue to grow, pushing their way through the mulch to the surface.

If you need to block weeds, it would be better to choose a denser mulch like wood chip, which is much more effective. You can make deeper mulches of pine straw to reduce weeds to a degree, but overall, this doesn’t tend to be the best option.

If you have a sloping area of your garden where other mulches tend to slide off gradually, pine straw mulch might be the perfect solution. Because its fibers are longer, they cling more effectively to each other, and this helps them to stay in place.

The needles lock around each other, stopping them from slipping and forming a sort of mat. This won’t prevent all movement entirely, but it should help to minimize it and make sure that the mulch stays where you want it.

Because pine needles are acidic, many people think that pine straw mulch must be acidic, too, and will alter the pH of the soil. This could discourage you from using it if you already have quite acidic soils, but actually, it’s not something you need to worry about.

Pine straw mulch is not thought to alter the pH of the soil radically. As it breaks down, it becomes more neutral, and it is unlikely to have much effect – if any.

Freshly fallen pine needles can acidify soil to some degree, but pine straw mulch shouldn’t be a problem.

Since it doesn't alter the pH of the soil, pine straw mulch is ideal for most berries that prefer slightly acidic soil. 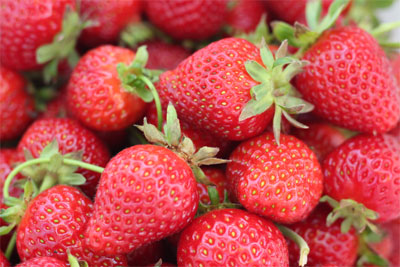 More and more people are looking for ways to tread lightly on the planet, and pine straw mulch is a good option if you need to do a lot of mulching in your garden. It is far more eco-friendly than wood chip mulch because it doesn’t depend upon trees being cut down.

To be clear, a lot of wood chip mulch is the result of waste products, and it is not inherently bad for the environment. However, it still requires trees to be cut in order to be produced, whereas pine straw mulch does not.

Of course, it isn’t a perfect material. Massive pine tree plantations come with many problems and have a wide range of environmental impacts, both positive and negative.

On the whole, however, pine straw mulch is a good addition to the garden and is often the best option for being eco-friendly.

It is also one that you may be able to make for yourself if you have a pine tree in your backyard. Rather than bagging up and disposing of the needles each year, you should remove the sticks and the cones and save the needles. You can allow them to break down a bit and then use them as mulch around your garden.

This is one of the best ways to cut costs in your garden, and even if you haven’t got enough mulch to do the whole area, you can cover some. You will also be cutting out the fuel miles and any packaging required, increasing sustainability.

Mulching is often done to protect vulnerable plants from cold or hot weather. Pine straw mulch is a particularly effective insulator because of its airy, porous structure, which traps pockets of air and prevents the temperature around your plant from rising or dropping dramatically. 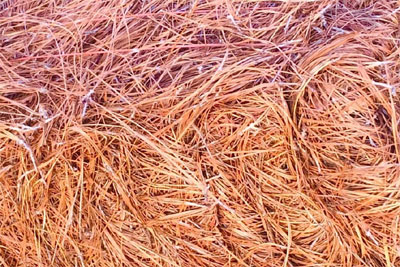 Pine straw mulch is an excellent choice if you need to mulch in your garden, although it will not work well as a weed suppressant. It’s cheap, light, and easy to use, as well as better for the planet in many cases.