Growing Elderberries in Pots and Containers 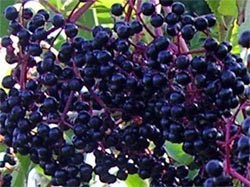 Elderberries are very resilient plants, which can be grown in large flower pots and containers.

Although they are mostly grown in permanent locations, elderberries in pots and containers grow great smelling flowers and healthy and juicy fruits and can be a quite decorative addition to any garden or even larger balcony.

Growing pot or container should be rather large - at least 60cm (24 inches) in diameter and 50cm (20 inches) deep, with plenty of drainage holes. If you can fit larger container, feel free to do so, just keep in mind that such larger containers, although provide plenty of room for roots, are also hard to move around. If you do have a need to move pots around a lot, before filling them with the soil, position them on base with wheels.

Elderberries tolerate a wide range of soil types, fertility and pH levels, but will benefit from moist, rich soil with pH between 5.5 and 6.5. Although elderberries can be often found near creeks and on the banks of rivers, such water is relatively rich in oxygen and elderberries' shallow roots will not start to rot easily even if in contact with such water. In pots and containers, excess water will make roots rot rather easily - be sure to use soil rich in organic matter and feel free to add hydroton pebbles.

Such combination keep roots moist, but not waterlogged and every time container is watered, stale air exits the container. As water evaporates, fresh air enters the container.

Fertilize elderberries in late winter and early spring by adding slow release 10-10-10 or similar NPK fertilizer and adding some compost. During summer, feel free to add some NPK fertilizer again, depending on the plants size and condition. Also, liquid fertilizers can be used in low dosages on a weekly basis.

Pruning of elderberries in containers is very important. Best time for pruning is in late winter or early spring. Strong pruning will keep elderberries from outgrowing their pots. Canes are removed by cutting them off at the soil level - remove broken, damaged, ill and three years old (and older) canes. 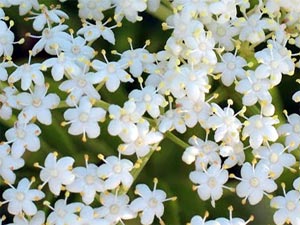 Since elderberries are grown in the pots, leave 5-8 canes per pot (depending on the size of the pot) and spread those canes evenly on first-year (produce a light crop of flowers and fruit) and second-year (produce large crop of flowers and fruits) canes. Third-year canes can be quite large, but crop is not so large. If third-year canes are not removed, soon elderberry bush will become elderberry tree requiring transplantation  on the permanent location.

Elderberries prefer sunny position, but will tolerate some shade, especially during summer heat. American elder (Sambucus Canadensis) is one of the elderberry shrubs that produce flowers and fruits well in partly shade - better than Black (Sambucus Nigra) and Red (Sambucus Racemosa) elderberries.

During winter, elderberries don't require any special care - just be sure that roots don't freeze. Keep containers away from strong, cold winds which could damage the plants and turn them over.

Note: Fully ripe fruits of Black (Sambucus Nigra) elder are safe raw for humans, while all other raw elderberries should be considered NOT EDIBLE by humans. However, when cooked and prepared as jams, jellies, in pies and cakes, they are delicious with many health benefits.

If you make your own mixed berry jam, adding some elderberries will alter aroma and fragrance and make it - better. Also, dried flowers are used to make great and refreshing tea and other drinks.