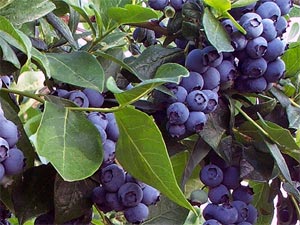 You might have heard that blueberries are good for you; but do you know how exactly they are good for you and to what extent? If not, you will find it interesting that these tiny blue gems are extremely precious and do a lot of good to your health, though their size is quite small.

For those of you who eat raw blueberries regularly, knowing about the health benefits of blueberries will be encouraging and delightful, while for those who eat them sparingly it will be an eye-opener, and hopefully they will make blueberries a regular ingredient of their daily meals.

A Small Introduction to Blueberries

Blueberries come under genus Vaccinium, and the fruits we buy commonly as "blueberries" come under section Cyanococcus and are native to North America. Blueberries are classified into two major types: wild and farmed. The wild ones are usually called "low bush", while the farmed variety is called "high bush". Scientists have found both these varieties important regarding their nutritional value and ability to impart health to those who eat them. Read more about blueberries.

Wild, as well as farmed blueberries, are rich in phytochemicals known as polyphenols. They have one of the highest antioxidant potentials amongst all fruits, spices, vegetables, and seasonings. Among their contents is a significant amount of anthocyanadins which impart blue, reddish and purple colors to the fruits and vegetables. Blueberries contain anthocyanins like delphinidins, malvidins, cyanidins, pelargonidins and peonidins. What's more, blueberries also contain hydroxycinnamic acids like coumaric, ferulic and caffeic acid, hydroxybenzoic acids like procatechuic and gallic acid and flavonols like myricetin, quercetin, and kaempferol.

Though blueberries are widely used in cuisines of most countries in the world, they impart their optimum health benefits when eaten raw. However, you can enjoy blueberries by freezing them because freezing doesn't affect the nutritional contents of blueberries. So, you can buy fresh berries in seasons and store them at 0° F (-17° C) and enjoy them year round.

Blueberries are rich sources of vitamins C and K and fiber. The anthocyanins in blueberries which impart the rich bluish purple color to the fruit may help stop degenerative ailments, like heart disease, cancer, memory loss and stroke.

Blueberries for A Healthy Brain

In a study done by the researchers from the University of Cincinnati Academic Health Center, on adults whose average age was 76 years, blueberries were given for daily consumption for 12 weeks. The results were encouraging, suggesting that blueberries might be beneficial not only for memory but also for retarding or postponing the onset of cognitive problems commonly associated with aging.

Blueberries for A Healthy Heart

The fact that regular consumption of blueberries may prevent cardiovascular disease has been established by a new research acclaimed by the United States Department of Agriculture-Research, Education and Economics.

Researchers at the University of Arkansas conducted a study wherein they fed mice with a meal containing blueberry powder and they found that it reduced atherosclerosis. The findings of the study have been published in the Journal of Nutrition in which scientists have mentioned that the benefit is a result of the antioxidants in blueberries which reduce the oxidative stress which causes heart disease.

Another recent study done by the scientists at the University of Maine published in Applied Physiology, Nutrition, and Metabolism reveals that long term, regular consumption of blueberries may help prevent or improve pathologies related to the metabolic syndrome - a group of risk factors including hypertension, obesity, dyslipidemia, insulin resistance, glucose intolerance and inflammation.

All berries are known for their low glycemic index, i.e. they have very low sugar content. GI is a common criterion to identify the effect of a food on blood sugar level. Foods with GI 50 or lower are considered to be having a "low" GI. Thus, berries have a low glycemic index. But blueberries are not famous for a very low glycemic index among other berries with its GI ranging between 40 and 53. However, the latest study has shown that blueberries have a positive impact on the regulation of blood sugar levels in patients diagnosed with type 2 diabetes.

Blueberries are rich in flavonoids which may prevent urinary tract infections, because they prevent UTI-causing bacteria from getting attached to the bladder lining and thus can stop their growth.

Blueberries for Stopping Cancer and Cholesterol

Besides fighting against the oxidative stress and thus preventing heart disease, blueberries have been found to potentially help to prevent cancer and cardiac disease by the virtue of other mechanisms.

Anthocyanins in blueberries have been proven to have the ability to help stop the growth of colon cancer cells in some studies.

Stilbenes in blueberries have been found to potentially lower cholesterol.

So, henceforth whenever you find blueberries, eat them and ensure lifelong good health!