Health Benefits of Blackcurrants and Redcurrants

Currants are the wonderful fruits that are easy to grow whether you grow them in your backyard or in an apartment in containers, great to taste and can be eaten fresh or in the form of jams and jellies. But even more important is the fact that they impart a number of health benefits.

Currants are native to northern and central Europe and Siberia, and they grow fast as deciduous small shrubs attaining a height of 5-6 ft. They can be easily grown in other regions where there are humid summers and chilling, severe winters. There are multiple colors in currants, like black, red, white, pink and yellow, but black and red currants are apparently the most popular varieties. Here are their health benefits...

The botanical name of blackcurrant is Ribes nigrum. The bush bears bunches of small berries, each berry being about 1cm in diameter, extremely dark purple, almost black in color and has a silky skin, with its apex carrying a persistent calyx. There may be 3 to 10 seeds that are edible, within the fruit. Other varieties of currants, such as red, white and pink are considered substandard to blackcurrants in terms of the amount of antioxidants the fruits contain. Another variety is Jostaberry which is a hybrid of R. nigrum and wild gooseberries. Here are the health benefits of the blackcurrants.

Contain Anthocyanins: Blackcurrants contain a high amount of anthocyanins, a phenolic flavonoid phytochemical. Studies have shown that because of this phytochemical, consumption of blackcurrants can impart potential health benefits against aging, neurological diseases, inflammation and even cancer.

High in Vitamin C: Blackcurrants are rich sources of vitamin C, which is a potent antioxidant too. If you consume 100gm of fresh blackcurrants you get more than 300% of the daily recommended intake of vitamin C. Studies show that eating fruits containing Vitamin C in high amounts helps body to fight against infectious diseases and also remove free radicals from the body.

Vitamin A and Flavonoids: There is also a small yet significant amount of vitamin A as well as flavonoid antioxidants like zea-xanthin, beta-carotene and cryptoxanthin in blackcurrants. All these compounds act as antioxidants too. Vitamin A is also essential for keeping up integrity of skin and mucosa, and also for the health of vision. So also, eating natural fruits high in flavonoid antioxidants provide protection against cancers of lungs and oral cavity.

Rich in Vitamins: There are several essential vitamins in fresh blackcurrants like vitamin B1 (thiamin), vitamin B5 (pantothenic acid) and vitamin B6 (pyridoxine). These are essential vitamins, which means that our body needs them from outside sources (body doesn’t produce them) for a healthy metabolism.

Rich Source of Iron: Blackcurrants also contain a significant amount of iron. 100gm of blackcurrant gives you around 20% of the daily recommended dose of iron. As you know, iron is extremely essential for the formation of RBCs (red blood cells) that are produced in the bone marrow. It’s an important cofactor in cytochrome oxidase guided cellular metabolism.

Many other important minerals like calcium, copper, magnesium, phosphorus, manganese and potassium are also provided by blackcurrants.

Blackcurrants should be picked intact. You can avoid the damage by picking the whole string by stem without damaging the spur. Only pick berries with glossy skin and avoid those with cut skin, bruises and leaking juice. If you don’t want to eat them fresh, store them in fridge where they remain fresh for a few days. While buying from stores, only buy those which look healthy and bright in color, and are uniform in size. Wash in cold water before using, keeping their texture intact.

How to Consume Blackcurrants?

Blackcurrants can be anytime eaten fresh. However, you can also consume them in various other forms. Here are some:

Obviously this tea is extremely high in antioxidants. ¼ cup of fresh blackcurrants turn into 1 tablespoon when dried, and can be used to make 2 cups of tea. 1 tablespoon of dried blackcurrants have over 50mg vitamin C that boosts your immunity and helps in repair as well as growth of body tissues, along with protecting body from free radicals and toxins.

Around 75% i.e. 674mcg of copper is provided by a cup of dried blackcurrants. Copper is useful for collagen synthesis, absorption of iron, energy metabolism, and inhibition of free radicals from cellular damage. Adequate intake of copper reduces the risk of osteoarthritis, osteoporosis, anemia and thyroid problems.

A cup of dried blackcurrants also provide 0.675mg of manganese which satisfies 37.5% of RDA of a woman and 30% of RDA of a man. Manganese is important for strength of body, bones and fertility, health of nervous system and formation of hormones, proteins responsible for blood clotting, bone tissue and superoxide dismutase. Lack of manganese in diet increases the risk of arthritis, osteoporosis and diabetes.

A cup of dried blackcurrants also contain 1,284mg of potassium which is 27% of the RDA of potassium for an adult. Potassium reduces the risk of kidney disease, osteoporosis, stroke and high blood pressure.

Blackcurrant Seed Oil: Blackcurrant seed oil is effective against immunity disorders, thinning of hair and inflammation. The oil is obtained by cold pressed method; however, methods like supercritical carbon dioxide and solvent extraction are also used, but they don’t yield organic oil because chemicals are used in them to extract more amount of oil. To get real health benefits, you should use the cold pressed organic blackcurrant seed oil.

The oil is rich in antioxidants that protect body from cell damage. It also has powerful anti-inflammatory, cardioprotective, immunostimulant, anti-rheumatic, anti-allergic and anti-neuropathic properties. 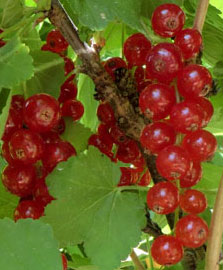 Lower Glycemic Index: Redcurrants have lower glycemic index than most other foods, since the sugar in this fruit is absorbed slowly in blood and thereby prevents blood sugar crashes, sugar spikes, sugar cravings and mood swings.

Fights Infection: As a cup of redcurrants has 77% of RDA of vitamin C, a powerful antioxidant, it boosts body’s immunity to fight against infectious agents and also against cancer-forming free radicals.

Great for Skin and Hair: Because redcurrants have such a high level of vitamin C, it is also good for skin and hair as it produces and maintains collagen, an important protein for skin and hair.

Energy Production: A cup of redcurrants carry 10% of manganese, an important cofactor in certain enzymes responsible for energy production as well as antioxidant protection.
Assistance in RBC Production: Redcurrants contain iron and copper, essential for blood cell production.
Bone Strength: Redcurrants also contain good amount of vitamin K, necessary for maintaining calcium in the bones. It also reduces excretion of calcium through urine. A cup of redcurrants gives you 15% of RDA of vitamin K.

Helps in Menstrual Cycle: Redcurrants help in regulation of menstrual cycle and relieve pain and colic during menstruation.

Removes Toxins: Redcurrants are great diuretic and promote perspiration because of which they help to remove toxins from the body.

How to Consume Redcurrants?

Redcurrants too can be eaten fresh or dried like blackcurrants, but as they are sourer, they aren’t as popular as blackcurrants. Mostly they are made into jams, jellies and other culinary preparations, and are used for garnishing because of the attractive red color. They can also be preserved for longer by refrigerating. Remember that washing before storing will make them saggy; so, don’t wash. Their acidic content can be reduced by adding sugar, agave nectar or honey, and of course, by cooking. But for having their maximum health benefits, you can consume them in following ways in addition to eating fresh.

Redcurrant Tea (Extract): Tea is made from dried leaves of redcurrant and is extremely beneficial for health. It eases symptoms of rheumatism and gout. It’s also effective in compresses for wounds that are taking time to heal. It can even be used as a gargling solution to cure mouth infections. Redcurrant tea is rich in antioxidants, so destroys free radicals, and so, is helpful to reverse aging and degeneration of health.

Redcurrant Oil: Oil is extracted from seeds of redcurrant and is used for making tarts and even soaps. It has a mild fragrance and is good for skin health. It’s used as cooking oil too.

Currants - black, red, yellow etc. are great for your health, they are easily grown in the backyard and even in the containers. So, if you are not growing few plants of the currants, what are you waiting for? :)