Health Benefits of Watermelon - How Many Calories are in Watermelon?

Watermelons are one of the favorite refreshment fruits and snacks for many people.

However, many people wonder are watermelons healthy at all and how many calories they contain. 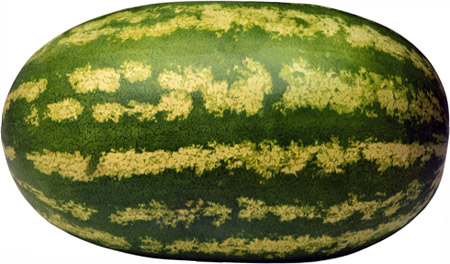 Nutritional values of watermelons are given in the following table:

Watermelons are mostly water, around 92% of watermelon weight. They contain only 30kcal per 100g of fruits and most of those calories come from carbohydrates (around 7-8g) - mostly various sugars (around 6g).

The glycemic index of watermelons is rather high - 72, but if portions are kept at moderation, for example, 300g, then the glycemic load of such watermelon is moderate - around 15. For more on this topic, please check Glycemic Index and Glycemic Load of Common Berries and Other Foods article (link opens in the new window).

Watermelons are not some kind of wonder fruit - they contain most vitamins and minerals required by humans, however, some vitamins and minerals are rather low or not present at all like iron, phosphorous, vitamin D, B-12, etc. Sodium is also very low - 1mg per 100g of fruits, which is actually very good.

Taking into account the amount of calories in watermelons, they are very rich in vitamins A and C - 1 kg of watermelons has only 300 calories and provides 5700 IU of vitamin A and 80mg of vitamin C. Also, watermelons contain other minerals, antioxidants, and helpful compounds like selenium, choline, lycopene, betaine, phenolic antioxidants, flavonoids, citrulline, etc.

Watermelon health benefits can be summarized as:

- due to the content of minerals, watermelons are high alkaline fruits, helping in the regulation of the body's pH factor.

- since they are mostly water (hence the name), watermelons help hydrate the body. This is very important during summer heat and periods of increased sweating. Due to increased water intake, watermelons help flush down the toxins and help kidneys stay clean.

- help bone development and bone health, especially when combined (not necessarily at the same meal) with foods rich in calcium (milk, cheese, etc) and vitamin D (seafood like fish, for example).

Long story short - whenever you have a chance, incorporate watermelons in your diet. However, too much of something is not always good and due to the simple carb content and glycemic index of watermelons, watermelon daily consumption should be limited, especially by people who have issues with high(er) blood sugar levels.