Eggplants are often used as a side dish for meals with fish or meat, but also with eggs, cheese, and similar.

Eggplants can be grilled on a non-stick grilling pan very quickly, and as such, they can enrich many meals, especially with the addition of some garlic and bacon, but also parmesan, olives, onions, etc.

The recipe is simple, especially if You don't want to add garlic, bacon, or anything similar to the eggplant slices. 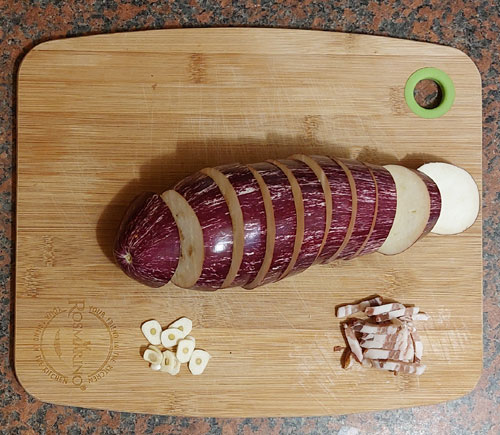 So, take an eggplant, a clove of garlic, and two thin slices of meaty bacon.

Cut the eggplant into 1/2 inch (~12-13 mm) thick slices, slice the garlic as thin as You can and cut the bacon into strips.

Note: I didn't add any salt. Some people use it to remove the bitterness from the eggplants, but personally, I don't see it as a very effective method. After all, some eggplant bitterness is part of its flavor, and the bacon added to each slice already has enough salt... 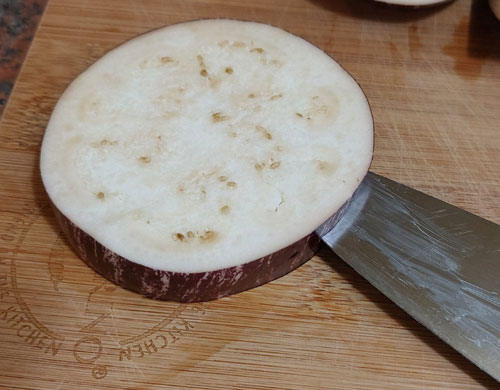 Using a knife, make 2-3 cuts in the eggplant slices and place a slice of garlic in one cut and 2-3 strips of bacon in other cuts.

Note: 1/2 inch thick slices of eggplant are sensitive to breaking, so put garlic and bacon carefully. Thicker eggplant slices need more time to grill - personally, 1/2-inch slices are an optimum thickness for a recipe like this one.

Put "stuffed" eggplant slices on a kitchen board and add some olive oil on top of them.

Note: eggplant is a low-calorie vegetable, so adding more than one tablespoon (15g) of olive oil can significantly increase the calories. 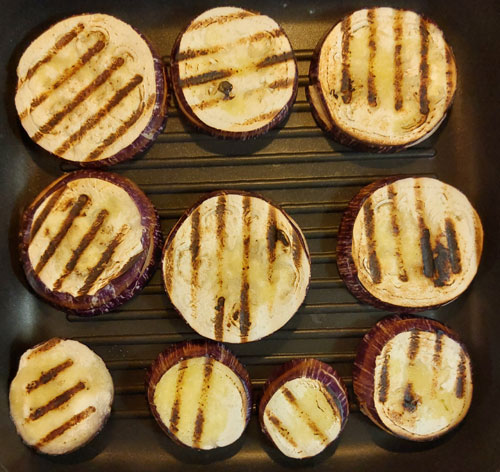 Preheat the non-stick grilling pan and put the slices with the oily side down. Grill for 3-4 minutes on one side, and then flip the eggplant slices.

Depending on the eggplant thickness, each side should be grilled for around 3-4 minutes, twice. 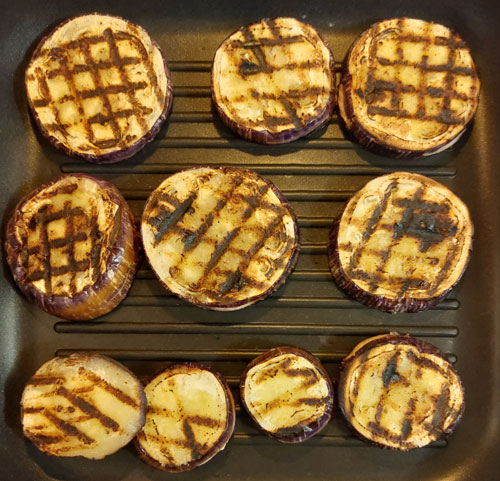 And that's it, grilled eggplant is done and can be served. 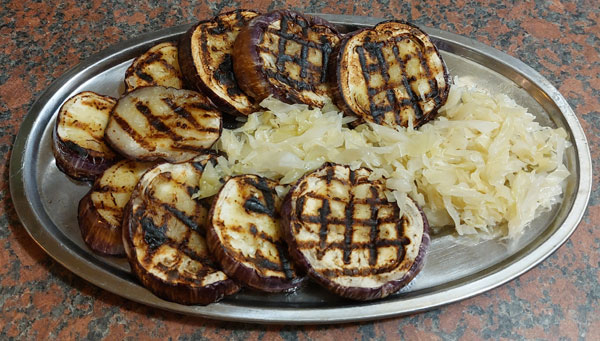 In this recipe, the eggplant is served with some sauerkraut.

To make things a little bit spicy, one can add some parmesan on top of the eggplant, especially while still hot/warm.

Also, while grilling, one can add some green pepper (paprika) and grill it with eggplant.

Few green olives can be added if the fish is for a main meal, etc.

As one can see, eggplants can be used for various meals, and best of all, they are very low in calories...

The eggplant used in this recipe has ~300g, but we also added some olive oil and bacon. Thus:

So, the total calories in this grilled eggplant (not counting sauerkraut) are ~300 calories, of which only 75 calories come from the eggplant itself - that is why one has to be careful with adding olive oil, bacon, etc.