Rose Pests: What Is Eating My Rose Leaves?

Rose bushes make beautiful accompaniments to any backyard garden or planter. That’s why, if you’re having issues with pests eating the leaves on your rose bushes, you need to figure out what these pests are and how to identify them.

Common rose pests that feed on the leaves include rose slugs, leafcutter bees, aphids, Japanese beetles, and flower thrips, among others. Many of these pests feed on leaves by sucking sap from them and depending on where you live, different species may be more common. 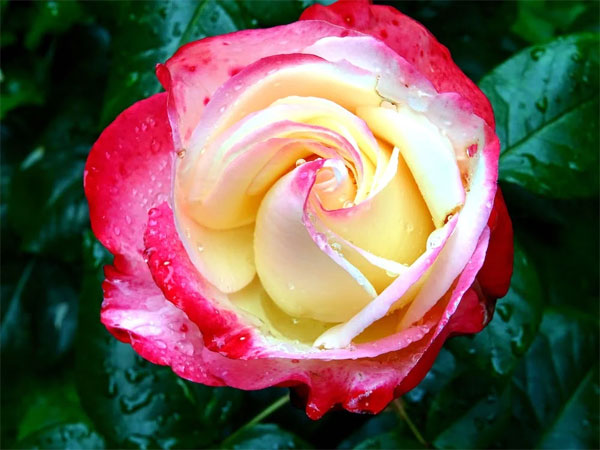 In this detailed guide to rose pests, we’ll highlight the bugs that are most commonly found feeding on the plant’s leaves.

Stay tuned for information regarding when and where certain rose pests are most common, as well as ways you can easily identify them on your rose bushes. Let’s get into the guide!

Rose slugs - also known as rose slug sawflies - are not really slugs, as they only take this form in their larval stage. Once mature, they become sawflies.

Rose slugs are notorious leaf eaters when it comes to rose bushes. They will feed on both sides of the leaves and may or may not chew all the way through to create holes. 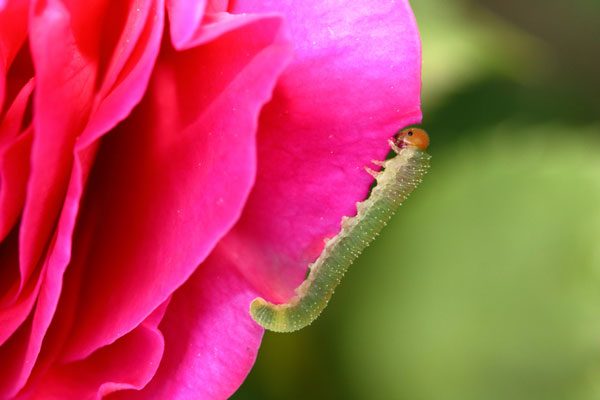 When Are Rose Slugs Common?

One of the reasons that it can be difficult for people to detect rose slugs is that they come out to feed at night. You can also look out for them in late spring to early summer months, when the larvae are more common.

In fact, the adult sawflies lay their eggs earlier on in spring, and the rose slugs actually hatch and emerge on the leaves of plants.

Where Are Rose Slugs Common?

Although this larval pest is found throughout the world’s continents (with the exception of Antarctica), there are some places where it’s more common. Notably, you’re more likely to find rose slugs in areas located in the northern hemisphere where the climate is temperate.

How to Detect a Rose Slug Problem

There are a few different ways that you can figure out whether or not rose slugs are the culprit behind your eaten rose leaves.

First, you can inspect the damage done to the leaves. The distinct damage of a rose slug is a rose leaf that has an almost translucent look, where one or both sides of the leaf have been eaten but not all the way through.

Furthermore, check to see if the leaves have started to brown and curl. The combo of these two effects may indicate a rose slug problem.

You can also check the rose leaves at night to identify the rose slugs yourself when the larvae are known to feed. Most rose slugs are smaller than 1 inch long and green in color. Some varieties have white dots and brown heads, while others have bristles on their bodies.

Leafcutter or leafcutting bees are common rose pests, although it’s good to know that their damage is often minimal. These smaller, honeybee-sized pollinators cut leaves - as their names suggest - in order to make nests.

They sometimes enact this process on rose bush leaves. Below, we’ll discuss how to identify their specific cutting pattern. 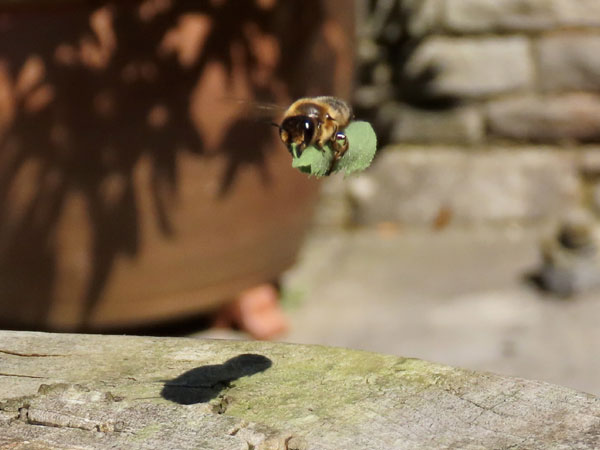 When Are Leafcutter Bees Common?

Because leafcutter bees use their cut leaf pieces to form nests, they stay put during the winter months and reemerge in the following spring. You’re likely to find these pests on your rose leaves in late spring but more commonly in the summer.

They are only active for a roughly 4-6 week period in the summertime and only once the average temperatures have surpassed 70 degrees F.

Where Are Leafcutter Bees Common?

Leafcutter bees, such as alfalfa leafcutter bees, are common in North America due to their cultivation there. Florida alone has more than 60 different species of the leafcutter bee. But they’re also found throughout South America - even at high elevations in the Andes Mountain Range.

It’s important to note, however, that leafcutter bees may really be found anywhere that flowering plant life is abundant since they are pollinators.

How to Detect a Leafcutter Bee Problem

While leafcutter bees typically won’t ruin a rose bush, they can detract from the aesthetic appeal of rose bushes. You’ll be able to identify their mark by examining the shape of the holes in your rose leaves.

The pieces of leaves they cut leave behind neat-looking, circular holes ranging from 0.25” to 0.5” in diameter. These may even appear as semicircles starting from the natural edges of the leaves.

The bees themselves have a unique look, too. They’re about the size of a honeybee and usually green, black, or metallic purple in color.

Many gardeners are familiar with aphids, as they’re a super common pest known to traverse all kinds of vegetation. Rose bushes are, unfortunately, no exception for this tiny bug. Aphids will cluster on different parts of a rose bush, including the leaves, to feed and suck out the sap.

Although aphids are small, they can multiply quickly and lead to the downfall of a rose bush, even leading to the growth of harmful plant fungi. 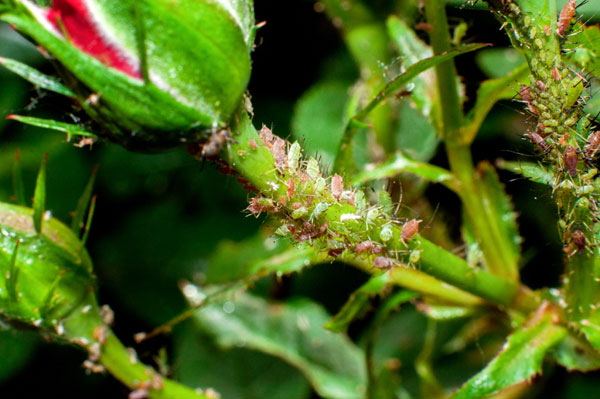 When Are Aphids Common?

Because aphids need a certain level of warmth to thrive, you aren’t likely to see them until spring. Sometimes, they emerge and start feeding as early as the beginning months of the season.

However, they start to reproduce, meaning that new generations will be active into the summer months.

Where Are Aphids Common?

It’s most common to find aphid colonies in northern regions with temperate climates. When it comes to plants, though, they don’t discriminate much and will feed on anything from flowers to fruit trees and rose bushes.

How to Detect an Aphid Problem

Aphids are fairly easy to detect because they dine in groups. They’re quite small - around ⅛ inch long - and may be white, yellow-green, red, black, or even brown in color.

They don’t take much effort to hide, as you can turn a leaf over to find them feeding off of its underside. In their wake, a plant will start to deteriorate in health.

Japanese beetles will leave your rose bush leaves skeletonized, and in some cases, they’ll devour a leaf completely. They feed on the leaves, as well as the blooms and buds. Over time, this feeding pattern can leave rose bushes looking scant and unhealthy. 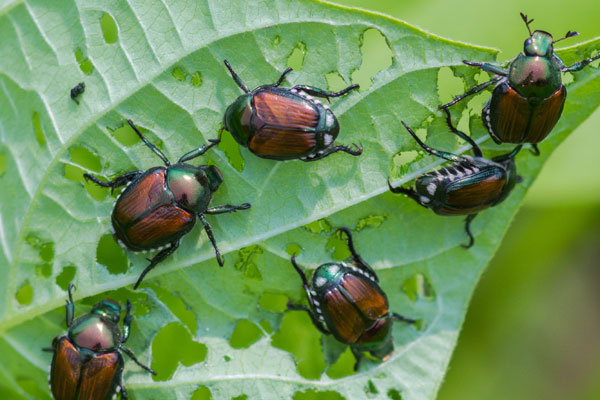 When Are Japanese Beetles Common?

These pests are more likely to be eating up your rose leaves during the daytime. What’s more, is that they have a relatively long window of activity in gardens - from May to August. Specifically, the early summer months are when they’re most active.

Once mature, they’ll live for up to 2 months before starting to die off with cooler temperatures.

Where Are Japanese Beetles Common?

It may be surprising to find out how versatile these pests are when it comes to their environment. While they have Asian origins, they’ve spread to North America, inhabiting the mid-U.S. as well as parts of Canada.

They can live in cities, as well as rural areas and backyards. As long as there's plant life to draw them in, they will take up residence and feed.

How to Detect a Japanese Beetle Problem

Luckily, Japanese beetles are pretty easy to identify since you can see them with the naked eye, and they have a signature, shiny green/bronze back. They’re roughly 1 cm long, on average.

But if you aren’t seeing the beetles and merely seeing the damage they do, you should look out for leaves that have been chewed with only the veins remaining.

A flower thrip is a winged insect that will absolutely feed on rose bushes. They are almost impossible to see with the naked eye, which makes detecting them somewhat difficult.

In addition to feeding on rose petals, they also suck the sap out of rose leaves by scraping the leaf surface.

When Are Flower Thrips Common?

You are likely to have issues with flower thrips from the early summer months through the mid-summer months. However, they first become active during the early spring months.

In the nymph stage, they are known to feed on plant life for up to 3 weeks before resting. And as the season continues, they continue to reproduce.

Where Are Flower Thrips Common?

You will find flower thrips throughout Europe, Australia, the United States, and even South America. They are more common in the Southwestern U.S., where the western flower thrips is a native species.

How to Detect a Flower Thrips Problem

These pests are sadly difficult to see and control. To identify their presence on your rose bushes, though, you should look out for a few key signs:

With a small magnifying glass, you may be able to see their yellow/brown bodies, which are around 1/16 inch in size. As nymphs, they have red eyes.

Some people suggest blowing carefully between the leaves or petals of your roses, which may spur the thrips to move about so you can detect them more easily.

There are many different types of mites that are known to feed on plant matter - both indoor and outdoor.

Specifically, you should watch out for two-spotted spider mites, Pacific spider mites, and Southern red mites when it comes to your rose bushes.

These tiny parasites will take up residence on the bottom sides of rose leaves as they extract nutrients and leave behind waste. 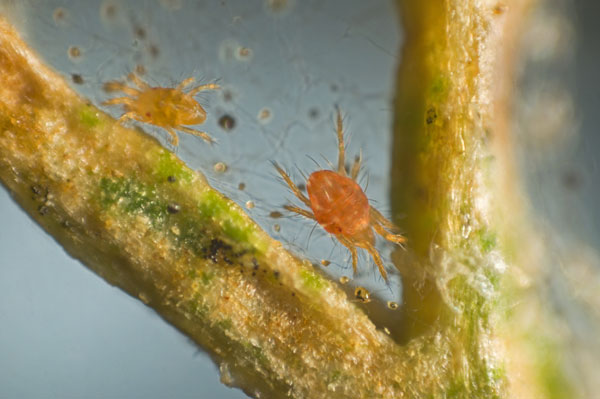 When Are Mites Common?

When it comes to Southern red mites, you’re more likely to see them in the cooler months of fall and spring.

Where Are Mites Common?

Mites are a widespread problem, but they tend to reside in the following areas:

How to Detect a Mite Problem

Mites are somewhat hard to see with the naked eye, but when they cluster, you can find them more easily. Depending on the species, they will be different colors, shapes, and sizes:

Based on their feeding damage, you can also detect mite infestations. Pacific spider mites feed between the rose leaf veins and leave behind round spots. Two-spotted spider mites leave behind a stippled, bleached-looking pattern on leaves.

And Southern red mites cause rose leaves to become speckled with white/yellow, develop webbing on the bottom, and even turn gray/brown in some cases. 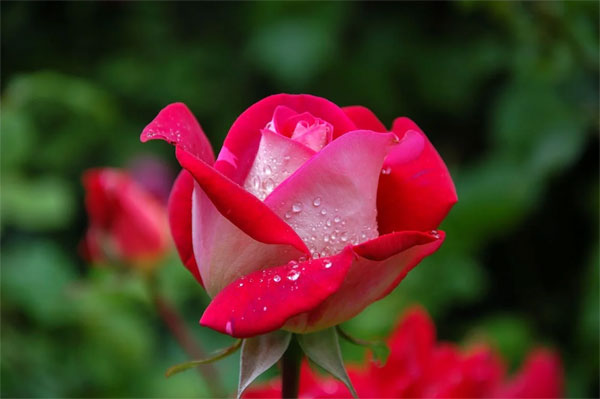 If you’ve been dealing with the adverse aesthetic and health effects of pests on your rose bushes, you may be dealing with mites, aphids, leafcutter bees, rose slugs, or even flower thrips.

Make sure to refer to our guide to narrow down which rose pest you may be dealing with based on your region, season, and leaf damage.