Green tomatoes can be stored green for a long time and ripen indoors easily. Such tomatoes are not as tasty as red tomatoes ripen on the plant in the garden, but they still taste much better than tomatoes found in supermarkets. 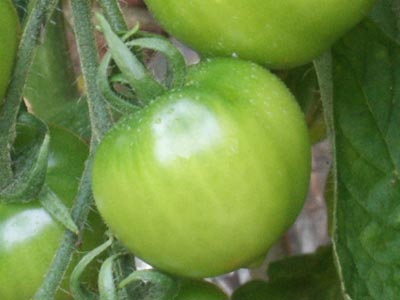 Best tasting tomatoes are homegrown tomatoes that ripe on the plant, in the garden. However, there are several reasons why would backyard gardener pick green tomatoes:

- plant issues - wind broke the branch with green tomatoes or even the entire plant. Or tomato cage collapsed, or ...

- at the end of the tomato growing season, when there are just a few green tomatoes left, tomato plants can be removed and soil patch prepared for other plants.

- it is autumn and there is a danger of frost. Frost can kill tomato plants and damage tomato fruits. It is better to pick green tomatoes in this case and ripen them indoors, than lose them from cold.

Ethylene is a gas released by tomatoes that speeds up the ripening process. Concentration of ethylene gas can be increased by wrapping green tomatoes into the bags and/or adding a ripen banana.

When ripening green tomatoes, keep in mind that tomatoes can not only rot, but that rot can easily spread from one tomato to all other tomatoes nearby.

To store and ripen green tomatoes, do the following:

- tomatoes that are half-ripen should be kept in the kitchen and also ripen right away.

Place half-green, healthy tomatoes inside cardboard box or paper bag, add a ripe banana, close the box or bag and leave them on the room temperature, away from heat sources and direct sunlight.

Since they are healthy and half-green, they will turn red in a matter of days - a week or two, at most. Although the danger of tomato fruit rot is low, tomatoes should be checked every other day, just to be sure. If the banana starts to rot, remove it and add a new ripe banana.

Plastic bag will keep ethylene near tomatoes better, but it would also increase humidity and danger of fruit rot.

Damaged green tomatoes should be positioned on a flat surface - use a wide, liquid-proof container to spread the tomatoes out. Tomatoes should be positioned on an absorbent layer in the form of thick cardboard and without touching each other - ideally, the distance between tomatoes should be their width, or generally 5 cm (2 inches). This way, if/when tomato starts to rot and release liquid, rot will not spread on the neighboring tomatoes. Cardboard box, with additional layer of cardboard on the bottom, will do just fine as ripening container.

To accelerate ripening process, place container on a room temperature, away from heat sources and sunlight and check them, if possible, on a daily basis.

Green tomatoes can be kept for months if the right conditions are met. And when they ripen, they taste much better than commercial tomatoes from greenhouses.

Again, use cardboard boxes: position tomatoes in the box, spaced 5 cm (2 inches) between each other and check them weekly or, if possible twice per week. Remove any tomato that started to rot. Half-red tomatoes should be moved into the kitchen to finish the ripening process more quickly.

When storing green tomatoes for longer period, don't put banana(s) into the boxes - in fact, make few side holes that any released ethylene gas can exit the boxes.

- Ethylene is very flammable gas, but few green tomatoes can't create any significant amount of it. However, some ventilation can be beneficial, especially if the dehumidifier is available to keep humidity and moisture in check.

- windowsills look as great place for ripening, but they are not. Light is not required for the ripening process, while light and heat lead to harder skin and often fruit rot.

- tomatoes grown in pots and containers outside can be moved indoors as temperatures plummet. Just be aware of all the spores, bacteria, and microbes that are also brought inside. However, if you have a small greenhouse, tomatoes in the pots can be grown year long - outside during warmer months, inside during colder months.

Long story short - green tomatoes can be stored indoors and ripen easily. They should be kept in a dry, cold area, positioned on a liquid absorbent material (cardboard is an excellent material for this purpose). Higher temperatures and ethylene accelerate ripening process, while lower temperatures, drier air and ventilation slow down ripening process and prevent mold and tomato fruit rot.