How To Grow Watermelons

Like tomatoes, watermelons are true berries. They can be easily grown in homes and small gardens, but they require space, good and moist soil, plenty of sun, and often protection from various diseases and pests.

But who doesn't like a slice of cold watermelon during the summer heat ... 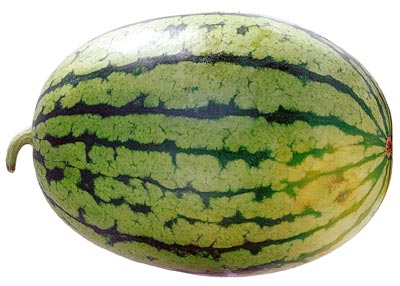 Watermelons are one of the favorite refreshment fruits and snacks for many people. Many people wonder if watermelons are healthy at all and how many calories they contain - for more info regarding this topic, feel free to check Health Benefits of Watermelon article.

Watermelons are native to Africa, and they need warmth, sun, and plenty of nutrients to grow and bear fruits. The size of varieties varies, but generally, they also need lots of space.

Watermelons grow best in soils with pH between 6 and 6.5 but will tolerate anything between 5 and 7. Again, they require plenty of nutrients and moisture, but they don't like soggy soils.

If you want to grow watermelons in your home garden in late autumn, add (aged) manure, compost, humus, seaweed, and some balanced NPK fertilizer like 15:15:15. Some people are 'afraid' that excess rain will wash away nitrogen from the soil, over winter - however, they are NOT concerned without a good reason! Although autumn fertilization is not an absolute requirement, it is a good thing to do.

Till the soil 30cm (one foot) deep and let it settle down till early spring. Watermelons have shallow roots, and there is really no need to till the soil deeper than 40cm (16 inches). 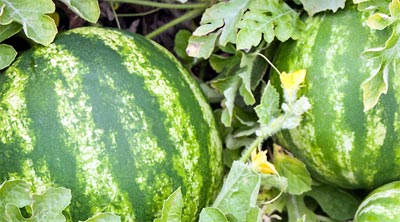 In early spring, check pH and, if required, adjust it.

Add again some aged manure and other organic fertilizers and balanced NPK fertilizer - amounts depend on the quality of your soil, used varieties, and density of plants - and dig everything some 15 cm (6 inches) deep.

Some growers tend to "force" nitrogen levels during watermelon growth and then "cut down" on nitrogen when flowering starts in order to promote the growth of fruits. In small gardens, it is perhaps not the easiest thing to do and, after all, IMHO, not necessary.

Good preparation of the soil is very important, and when done properly, all one can do is add some 15:15:15 or some similar NPK fertilizer with emphasis on potassium to the flowering plants. Amounts depend on the plants, but 30g (an ounce) per plant every few weeks is enough.

Depending on the variety, days to maturity range from 70 to 90. That and the fact that some varieties have two or more crops per growing season (or they bear fruits for a couple of weeks - depending on how one sees it) means that soil must be kept fertile and moist all the time.

During the growing season, watermelons require 2.5 - 5 cm (1-2 inches) of water weekly. In order to avoid or at least decrease issues with some diseases, water the soil directly and avoid watering 'from above' - if it must be done, water the plants early in the morning, so that leaves can dry quickly.

If possible, protect the soil using non-transparent foil and use a dripping watering system under the foil. During hot days, some leaves' wilting might occur even if plants are properly watered. If wilting is present in the morning, water even more.

Note: somewhat reduced watering during the last week before harvest can increase the sweetness of the fruits. Also, removing vines is not necessary for this purpose.

Sowing and Transplanting of Watermelons

When sowing seeds in the pots, keep in mind that watermelons grow fast, and they can easily overgrow pots and hence have issues with being transplanted onto the permanent position. Unless you live in a cold region, sow seeds directly into the soil, some 30 cm (one foot) apart, with 1.5 - 2 m (5-7 feet) between rows. Again, it depends on the variety used.

When plants start to grow, remove weak ones by leaving every second or third plant to grow.

Since plants are sensitive to low temperatures, sow or transplant plants at least 2 weeks after your last frost day.

Mulching can be very beneficial - it protects soil from direct sunlight and prevents excess moisture loss, it prevents weeds from growing, and if mulch is something like compost or aged animal manures, even better - more nutrients for plants. Remember, watermelons are very hungry plants!

In order to grow strong and healthy, watermelons must have plenty of sunshine, moisture, nutrients, and space.

Watermelons grow male and female flowers, so it is normal for male flowers to fall off. If female flowers are falling off, insects are not fertilizing them (bad weather, strong winds, etc.), but this can be done easily by hand and with great care - take a soft, small brush and after gently brushing 2-3 male flowers, brush female flower - do this for every female flower you see open, once or twice per day - female flowers rarely stay open longer than a single day. Bad weather can hamper natural pollination and reduce watermelon crops significantly - it doesn't happen often, but when it does, it hurts, at least, me :)

As fruits are growing, prevent the rotting of the melons by putting them on cardboard or straw. In colder areas, fruits can be positioned on aluminum foil in order to increase the warmth and sun exposure of fruits - this speeds up harvesting a little bit and (allegedly) can increase the sweetness of the watermelons.

Some gardeners even lift watermelons entirely off the ground using mesh fruit bags - this way, watermelons are kept away from the rodents and other pests that could damage the fruit and are safe from rotting.

Slugs are dangerous to small watermelon plants - they can even kill the small plant. Plants can be treated against these pests, but in small gardens, remove them by hand. Watermelon grows rapidly, and a single slug (hard to spot and remove) can't really hurt it.

Soil diseases are prevented by crop rotation and by planting grafted watermelons.

One of the biggest watermelon pests are the leaf and flower-eating bugs like spotted and striped cucumber beetles, pumpkin beetles, and other similar pests. They can be treated chemically, just be sure to read the manual carefully.

Since watermelons grow fast enough, they can cope with few bugs, especially in a healthy garden where crop rotation and diversity of plants is the norm!

If the leaves are kept dry, there should be no issues with mildew and similar fungus (leaves look like they are covered with some white powder). If they occur, treat them chemically (sorry to say that again), just be sure to read and understand the manual - some of the chemicals will end up on the fruits, and nobody wants freshly treated food on the table!

Harvesting and Storage of Watermelons 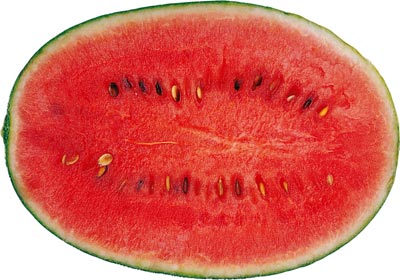 The easiest method is thumbing on the fruit and listening to the sound. If watermelon sounds like it is:

Also, when a watermelon is still green, it has a white bottom, while a ripe watermelon has a yellowish-colored bottom.

Be sure to check tendril:

One of the methods is squeezing the fruits between hands - ripe watermelons give a little bit. This also can damage the fruits, so be gentle.

Obviously, there are many ways to check if watermelons are ripe or not. It is an art - eventually, you will have to pick a melon and try it.

When picked, watermelons can be stored in a dry, cold, and dark room or basement for several weeks.

If you live in a warmer area, plant watermelon plants every few weeks to prolong the harvesting season.

For more information about watermelons, feel free to check the following:

or check the following watermelon articles:

Growing plants alongside each other in many different combinations can have plenty of benefits! If the plant you’re growing is a watermelon, you may be looking for a guide to watermelon companion plants.

Watermelon plants need sandy, loose soil with pH levels between 6.0 and 6.8, 8 hours of full sunlight, and a temperature of 65-95 degrees to produce excellent fruit. With these needs in mind, plants like marigolds, nasturtiums, and radishes make suitable companion plants for watermelons.

How to Grow Watermelons in Containers, Flower Pots and Grow Bags

Watermelons can be grown successfully in containers, flower pots, and grow bags if they are provided with key elements they require: warmth, plenty of sunshine, nutrients, moist, but well-aerated soil.